Reversed 5 of Swords: All is Not Lost

I try not to annoy my Tarot peeps with many references to divine timing.

It’s not like I don’t believe in it. More like I know how much I hate the phrase “divine timing” when I’m wound up about resolving something.

We most desperately want resolution for those issues we’re most intensely concerned about–even a not-so-great resolution–because we’re anxious. The fear weighs on us.

Sometimes, it seems like an iffy, obviously flawed and undoubtedly difficult path forward is better than none at all. At least we could shift focus from finding “something” to working with what we’ve got, right?

Maybe. But usually not.

Lowering our standards or giving up hope for getting what we want isn’t the most direct path to happiness. More to the point, though: sometimes what looks like bad news is really a door opening to a better resolution.

There may be some of the whole “bad news that isn’t” thing next week. 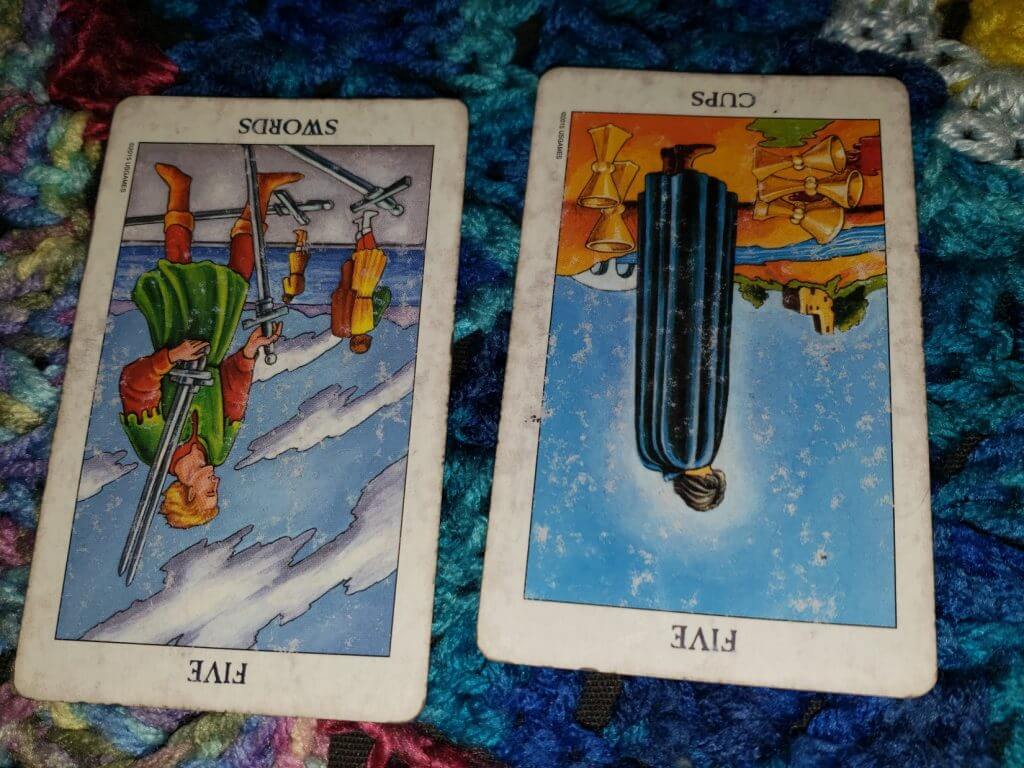 Aggh! Tarot fives! Better to get them reversed, but we can expect upheaval when we are getting Tarot fives. Fives always indicate motion, and usually of the uncomfortable variety. Sorry! That doesn’t mean the week is dire. But it may well feature some disappointment, at least for a minute.

This reversed Five of Swords says to me, “What looks like defeat isn’t. Not really.”

The answer you get may not be the one you’d been hoping for. Okay. Probably not.

And you probably won’t initially realize what you can do instead. Nonetheless, the “no” we have here is the best answer for right now.

Got that? Any “no” you get is the best answer for right now.

As far as advice, a reversed Five of Cups reminds us disappointments won’t be long-lasting. It may hurt, but not as much as we’d think beforehand. Understand losses are all going to be of the “mixed bag” variety this week. You may even find some relief unexpectedly after you allow yourself to feel whatever sadness is there at first.

In other words, it’s not a week of absolutes. Instead, it’s a week of shifting perspective. Losers may initially look like winners and vice versa. Bad news will still sting, but it will also illuminate something important, allowing for better-fitting resolution in it’s wake.

So yes. Divine timing will be at play this week. But I’m not going to annoy you by reminding you of that in the middle of it all.

Instead, I’m just going to encourage you to ride whatever feelings naturally arise and be kind to yourself in the process. Resolutions will come. When the timing is right.

Hang in there friends and as always, be kind to yourself through it all. It helps.

Temperance: From Micro to Macro