Ever get stuck with “they done me wrong” greatest hits playing in your head? That was the most recent Mercury Rx for me, as least part of the day every day.

I mostly shy away from that sort of mulling. I don’t think it’s uhelpful. But sometimes, I have to admit, we can slide into that groove and frankly, it can be enticing to be so damned right.

You know? I start checking off the boxes. Who judged me. Who was unfair or unkind. Who thinks they are better than me–incorrectly, naturally.

No need to feel sorry for me, though. It wasn’t overwhelming but more importantly, I did obtain a very insight that will serve me well forevermore: the escape hatch for the “They Done Me Wrong” blues.

What set me free from the mental playlist from Hell, you may ask?

It wasn’t an apology or acknowledgement. I mean, c’mon! You can’t trust your sense of happiness or freedom to outside forces. You know where I stand on that already. It’s a surefire recipe for “screwed.”  Others are too busy doing what they want to do to comply with my demands. We don’t all see the world the same way.

It was more a very simple realization: the deeds I resented (along with the emotional turmoil that resulted) were important–dare I say, vital–in me evolving into who I am today. The situations pushed and prompted me to consider what really matters to me. Essentially, I was forced into deciding,  consciously, who I wanted to be.

I like me. I am happy with who I am. Without the “done me wrong” bit, the “who I am” bit might not be the same. So ultimately, it was a favor.

This is an example of getting in harmony with yourself, your soul, who you really are. And it’s going to be something we’d be well advised to practice next week.

Are you ready? The outlook is potentially a bit bleak, but as I suggested in the intro, our advice makes any waves more than worth it. 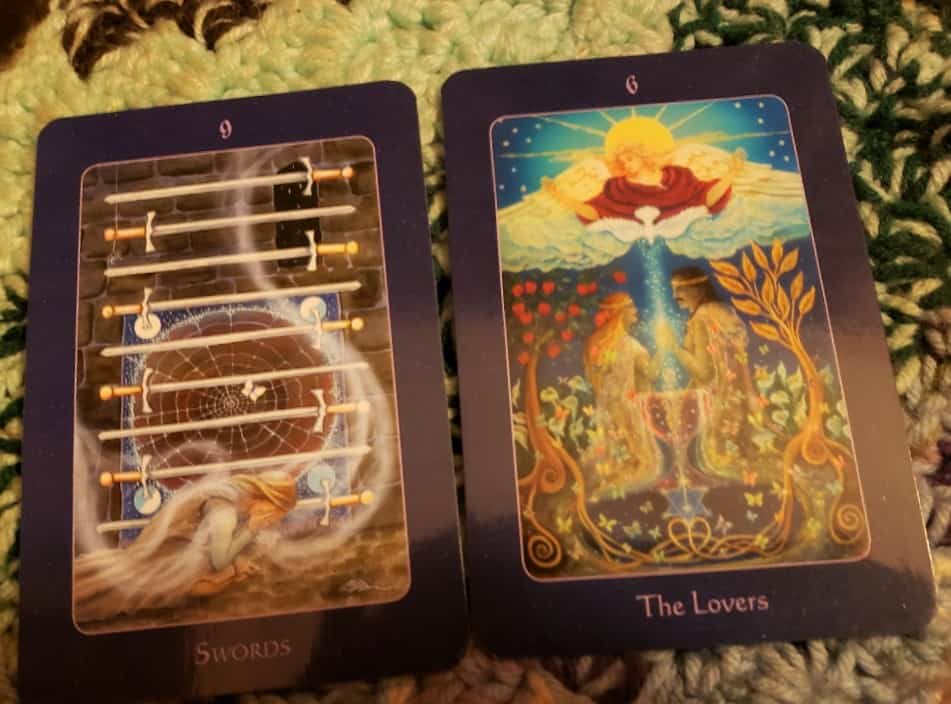 Ouch! The forecast is the Nine of Swords! Advice is much softer, coming in as The Lovers. Cards are from the beautiful Star Tarot deck.

Transcript from the (super quick) video version of this forecast below.

Ready for next week’s Tarot? Hang on.

Hi, this Dixie with a Fool’s Journey. The forecast for this week is pretty easy to understand. We’ve got the nine of Swords, which is stress, worry, fear, difficulty sleeping and guilt.

OK, it would indicate a lot of people out there with something on their mind. Now the advice is just as easy to comprehend. It’s The Lovers. What that means is focused not on what you’re worried about or you feel you’ve done wrong or whatever.

Focus primarily on what you want to get tuned in or in harmony with, who you really are, what’s really important to you. And that will help you kind of set aside the worries and stay on track.

OK, that’s what I got for you this week. I hope that’s helpful.

Peace out from the Zen Goddess.

Take your worries and your stressors and any mistreatment flung your way and spin gold out of it, okay? You can do it! Have a great week, friends.

Ace of Swords & Five of Pents: Kaleidoscopes & My Religion