I’ve had an insanely busy week, so I opted to do a video quickie forecast for y’all this week. Hope you don’t mind.

For the readers out there….outlook is the Three of Wands, with advice coming in from Death reversed. 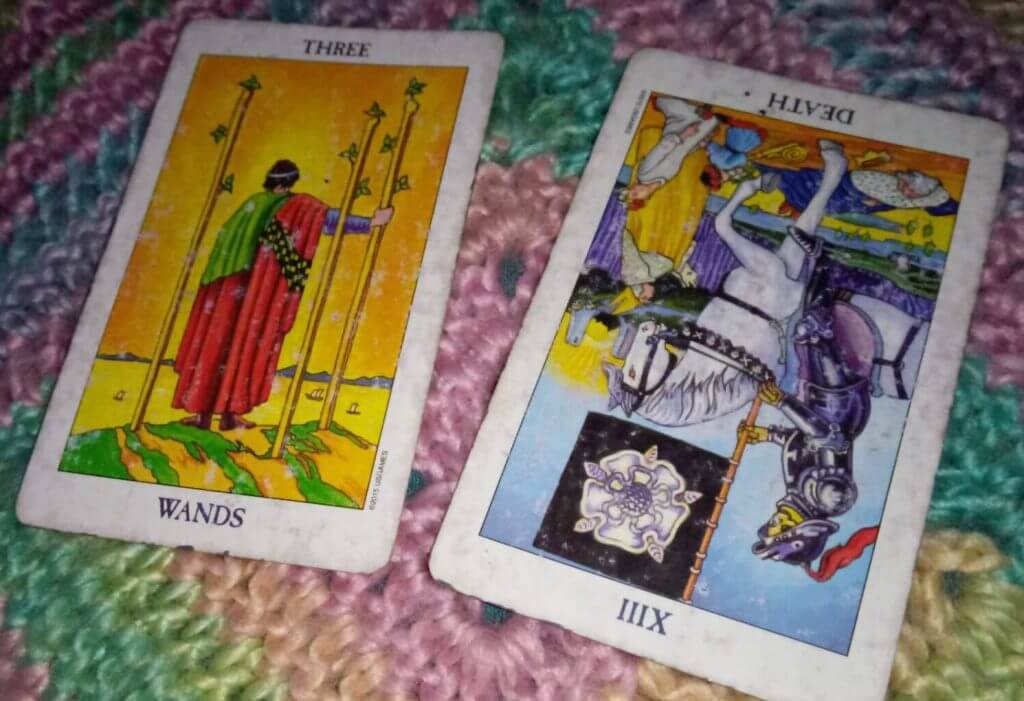 Outlook is the Three of Wands, with advice coming in from Death reversed. Transcript follows. [The formatting makes it look kind of like poetry, don’t you think? On a whim, I’ve decided to leave it that way.]

I have been super busy with work

and looking after my folks and all
the other things going on,

so I thought I would do a quick video
forecast for you all this week.

Okay.
So for the outlook, we’ve got

the three of Wands and for advice,
I’ve got death reversed.

What I want to say about this is this week
in general, with Mercury going direct.

stuff starting straight now, and you
can kind of see it on the horizon.

We’re still in the shadow
period, so there’s that.

But overall, it should be getting
a lot better in that regard.

As far as advice goes,

sometimes when we’re bothered about
something, there’s a tendency to kind

of want to be done with it and get rid
of it and just say, screw it,

I don’t care, I don’t want it
and kind of blow it up and move on.

You don’t need to do that this week.

In fact, I wouldn’t advise
that you do that this week.

You don’t need to put a fork
in it because it’s not done.

You need to set in the back burner,
set it aside, put it in storage,

It’s not our job to micromanage
the universe ever, really.

But this week not going to do any good.

Instead of trying to pin down and pursue

the specifics of the details or whatever,
what would make your journey better,

easier, happier, what you want,
getting where you want.

All of that be in the moment and focus on
the kind of energy you want in your life.

You can amplify that without worrying

about the details and let
the universe do its job.

You do yours, and your job is
to keep your own energy straight.

and figure all that out.

So that’s what I got for you.

I hope you have an awesome week and

whatever you got going in the background
isn’t driving you too nuts.

right here where you are today,
and let the rest of it work itself out,

or let the universe work
the rest of it out for you.

Peace out from the Zen Goddess

High Priestess & Eight of Cups Rx: Riding it Out