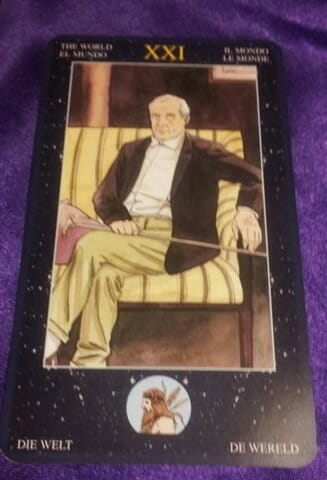 I never have any trouble picturing Saturn as an old man. And old man Saturn is the astrological association for the World card. When I first learned this fact, it surprised me. Why Saturn? The World card is a happy one, and few of us feel happy about Saturn’s presence!

This card is also associated with Tav, the last letter in the Hebrew alphabet: ת

Tav is the last letter of the Hebrew word emet, which means ‘truth’. The midrash explains that emet is made up of the first, middle, and last letters of the Hebrew alphabet (aleph, mem, and tav: אמת). Sheqer (falsehood), on the other hand, is made up of the 19th, 20th, and 21st (and penultimate) letters. Thus, truth is all-encompassing, while falsehood is narrow and deceiving.. – Wikipedia

The letter represents a completion, a synthesis of all the other letters. The shape of the Tav is made up of two other letters, דנ Daleth–Nun which spells “Dan” in Hebrew, meaning judgment. It’s a stamp of completion, judgment as outcome of cumulative action. It encompasses all that went before.

And the World is the culmination of the Fool’s Journey. Diploma time! Considering this, Saturn makes sense as the card’s planetary companion.

Old man Saturn asks, “What have you learned? What diploma have you earned?” It would be a great day to review accomplishments. If you feel you’ll fallen short in areas, fair enough. Look for the lessons. No sense wasting screw-ups! But there’s a good chance you’ve made more ground that you may realize in other areas. Give yourself credit for all the questions you got RIGHT. Because the finals are in and it’s time to assess.

Are you feeling the hand of Old Man Saturn?

Schedule a session with Dixie.

Chariot: Finding Your Way No Matter What

Two of Pentacles & Ten of Swords: Believe in Them