08/20/11: The Empress, Pomegranates and Paradox of Mothering 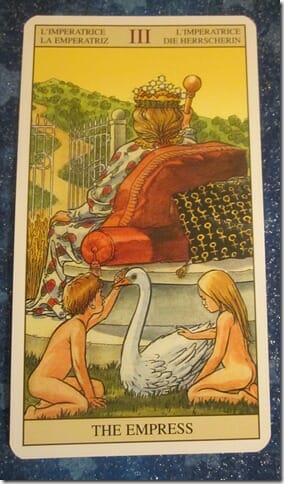 I’ve still got mothering on the brain. Having my daughter home, talking to moms in consults, watching friends lose or worry over their mothers, looking at whom and how I experience mothering is inescapable. So it’s not a shock to see today’s daily Tarot forecast centering on motherhood.

We have the Empress or Daughter of the Mighty Ones, associated with Venus. She embodies the maternal archetype, companion and counterpart to the Tarot’s Emperor. She often appears in a reading to signal pregnancy—literal or figurative. When you see the Empress, look to ways to nourish, nurture and care, for others or for yourself.

As one of the Tarot threes, her emphasis is on creativity, birth and joy. As one of the Major Arcana, her brand of mothering is transformative, both to herself and her progeny. The Empress is a powerful woman not to be underestimated, because her strength stems from the purity of her love. That love is an absolute force of nature, make no mistake. Yin or not, she is a very capable woman.

Her dress is white (signaling purity), covered with Pomegranates, which hold numerous symbolic associations—many surrounding fertility and mystery. You also see the Pomegranate elsewhere in Tarot, like on the banner behind the High Priestess. Fertility and mystery both surround these women. Both of them carry more force than is initially obvious.

For me, Pomegranates always evoke the myth of Persephone, who ate Pomegranate seeds while in the Underworld. According to the rules of the Fates, she would have to stay in the Underworld for having eaten while there, but her mother Demeter, Goddess of the Harvest, raised holy Hell by stopping all greenery from growing in protest. A compromise was reached, committing Persephone to spending half the year with Hades and forming the ancient Greek explanation for the seasons.

You think Demeter wouldn’t have kicked some ass to keep her baby from having to spend half the year in the Underworld? Yeah, buddy! But it wasn’t her choice. And those seasons we’re left with, sometimes kind, sometimes harsh, are very much a part of living, both for mothers and their children. Uncomfortable as they may be at times, they foster growth and perpetuate the cycle of life.

Inherent in this story is the paradox of mothering—you give birth, but you cannot live your child’s life. You cannot protect them from al darkness or (more likely), themselves. So they remain a part of you, but separate. More as they grow, the mother’s job is to continually step back, respecting their children’s process and lessons, while remaining receptive and alert for when loving kindness helps. Stepping back is a much harder job than making sure they eat right and are dressed warmly.

Demeter and the Empress both know, you do what you can for your offspring, but you don’t call the shots once your little creations have taken a life of their own. You may care more than anyone else can, but wrapped in that love is the recognition that part of the caring is letting go. That’s the natural order of life; refusing to do so cripples both mother and child.

The Empress would gladly sacrifice her own well-being for the sake of her children. Except by doing so, she shortchanges everyone. She is not a martyr, because she realizes she cannot offer the same gifts if she doesn’t remain healthy herself. The gift of a good example is one she could not provide otherwise.  The Empress reminds us that mothering starts at home—by nurturing ourselves.

Are you feeling the Empress?

Judgement & Eight of Swords: Honestly You