“The body is a sacred garment.” –Martha Graham 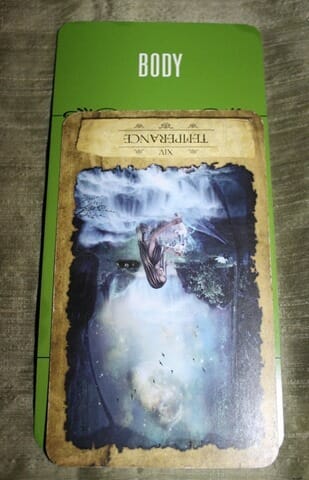 After several days of experimenting with the Deck of 1000 Spreads, I’m finding these combos to be like the Transparent Tarot in that they really do speak as a unit. I mean, Temperance inverted paired with the “Body” card? Eliminate toxins, yo!

Watch yourself. Don’t eat too much, don’t drink too much, don’t fill your body with crap and skimp on sleeping to boot. I would say people are out-of-sorts overall and quite frankly, you need your strength. Whether it’s dealing with out-of-sorts sorts or avoiding the becoming of an out-of-sorts-sort doesn’t matter.

Take care! And I mean that physically, tangibly, literally.

Can you do with some physical self-care?

p.s. The quote I almost used was funnier.

“I have the body of an eighteen year old. I keep it in the fridge.” –Spike Milligan

Deck of 1000 Spreads
by Tierney Sadler

King of Wands & Page of Swords: Process vs. Event