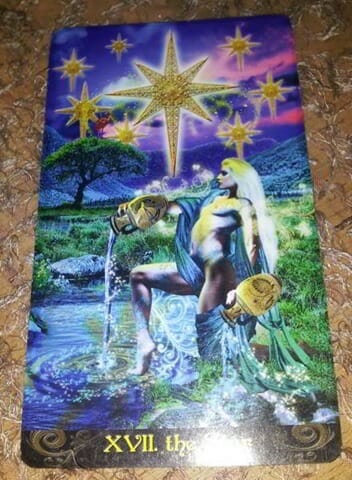 So…y’all probably know by now, the Star is associated with Aquarius and often is read as “hope and dreams.” It’s generally an optimistic card. But I’m not seeing it as so flatly clear cut right now. It feels more like…electrical charge. Electricity can light up your world or fry your nerves, you know?

Think of this in terms of an intellectual understanding. Aquarius is an air sign and the intellect is tantamount for Air energy. There is a kind of detachment, a sense of the far-away with the Star. Gazing upon the stars makes one feel both part of the infinite and insignificant at the same time. What overrides, though, is the sense of being a part of something bigger. One foot on the land, one foot in the water, the woman of the Star is naked—without pretense or illusion, working both in the material world and outside the material world. The water is the universal, the subconscious, the bigger world. The land is the material world. She pours her energy upon both.

Here’s the thing: you get to direct the imagination with your thought process. You decide, if you conjure up creative disasters to fearfully avoid, or creative options to save the day. The power is up. Choose which switch to flip.

Are you feeling charged up?