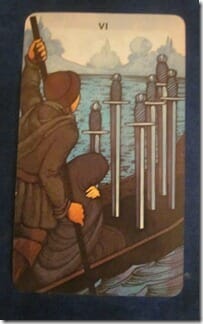 Transitions are just…hard. You know? Even necessary transitions, good transitions, moves to something bigger and better and more suited—still, they are just plain hard. I’m feeling this with the move to A Fool’s Journey from writing the Daily Tarot forecast at Elsa’s place now. Sadness is comingled with anticipation. It’s an odd mix, smacking of bittersweet.

Today’s Tarot is the Six of Swords or “Lord of Earned Success,” associated with Mercury in Aquarius. It’s another card people cringe at because of the sad tone, but just as with other challenging cards, it carries blessing in equal proportion to difficulty. Tarot swords can be challenging because so often, something is being cut out so there’s a sense of loss. But also like other Tarot swords, most often the detachment was the rational choice.

When you see the Six of Swords card, know your journey is already well underway. Detach (Aquarius) your thinking (Mercury) from the old way of life because you’re headed to new destinations. It’s perhaps some comfort to know this journey is not made alone, even though it may feel that way. Like all Tarot sixes, this is a cooperative effort even if it’s not immediately obvious, so you’ll have family, friends or some kind of guide along the way to support you. Acknowledge and appreciate the support you’ve got to get more of it.

(By the way—have I mentioned lately how much I appreciate you all following me here? Because I do.)

Despite the darkish mood, I always find the Six of Swords encouraging. By the time it shows up, the hardest part is behind you. You’ve made the changes, cut the ties, rectified the situations that needed altering. In short, you’ve done what needed to be done. What you’ve got left is no longer what you’ve expected for sure, but due the changes you’ve made, it’s what’s needed. I’d rather have what’s needed that what’s expected any day, even if it can be somewhat uncomfortable getting there.

How are your travels going?