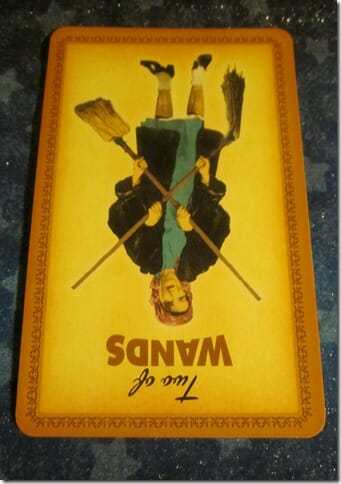 I’ve been known to stress over insignificant choices. Or maybe “known” isn’t the right word. I try to keep some of my oddness under the radar, thank you very much! But I’m self-aware enough to acknowledge nuttiness potential, even if I don’t want to parade it around the room.

Today’s Tarot is the reversed Two of Wands or Lord of Dominion, associated with Mars in Aries. Tarot twos denote choice. Will our happy housewife mop or sweep? She hasn’t the time to do both before company arrives! She’s not any closer to getting either done while she dallies around trying to decide, though.

I usually see the Two of Wands as indicative of  pressure to decide, as opposed to the Two of Swords, which is more about carefully and rationally weighing options. With the Two of Wands, there’s more of a push, a fiery drive to act along the lines of the Mars in Aries. Whether from within or without, these choices are vying for attention, competing. Inverted, we may be fearful to move or waiting for something else to make the choice for us.

Fear of making a poor decision can translate into avoiding action entirely. This is even less satisfying than making a less-than-perfect call. It’s true, there are times it’s best to wait, letting signs emerge and clarify. But not now. Here,  any constructive steps start the flow and ease the pressure. Getting closer will help, so lay off the second-guessing.

The reversed Two of Wands suggests action—decide what feels best to you, and move on it. Be prepared to adjust as you go, for sure, because each choice carries advantages and disadvantages. But do the best you can with the information you have; don’t let fear keep you from getting that floor in shape. You’ll be happier once you’ve made progress, and there’s a good chance you’ll learn something useful from the process.

Do you have a decision point hanging?