“Faith is not something to grasp, it is a state to grow into.” –Mohandas Gandhi

Throughout my life, I’ve had a distinctly love-hate relationship with the concept of Faith. I was born into a family offering me a ready-made cloak of faith with a belief system intricately interwoven. This was with the expectation I would claim it for my own and never set it aside. And for quite a while, I did. It was certainly easier than questioning.

But eventually, it was beyond obvious, this faith just didn’t fit anymore. I felt like a liar wearing it. So I  took it off, feeling somewhat naked in the  void that followed. Eventually, I’d pick up a new faith and wear that, and it would work for a while. But at those times when I felt let down, that my world was a mess and it simply could not work out right and feel good again…well, that would lead to a crisis of faith. That is the hard part. 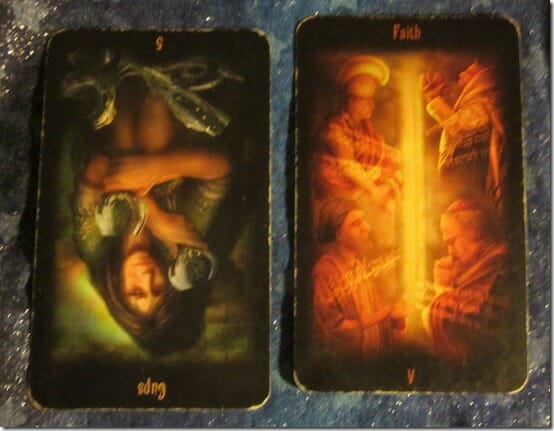 Today’s Tarot is the reversed Five of Cups (Mars in Scorpio) and the Hierophant (Taurus), here called Faith. We’ve got some Tarot fives today! Fives are associated with movement, change and sometimes, destruction. So as such, the fives usually speak to uncomfortable but unavoidable energy. This isn’t static in any sense of the word.

If you’re having trouble letting go of a loss, getting stuck in the mourning mourning phase, the way to cope is to reach for a higher perspective. Now, I’m not saying this is always easy. There are losses where I’ve found myself totally and completely unable to drum up some faith that it’s “all in the highest good,” you know? Not everything that we experience is pretty! Not every situation “works out for the best.” And in the thick of it, anybody who says so is begging to get smacked!

I’ve started to think of Faith more like a second skin—one that we shed periodically, perhaps, to allow for growth of a new layer. The shedding leaves us feeling raw at the time, but I see it necessary to ongoing growth. If the Faith you have doesn’t carry you through the tribulations you face, then you must reinvent. Otherwise, you’re left vulnerable.

Over and over again, I’ve seen we can go ON, process pain and continue to live. We may have to reassess what we’re putting our faith in, for sure, but I’ve never found a situation where we can’t grow ourselves a new skin.  And this isn’t just my personal experiences I speak to here. I’ve counseled hundreds of people over the years. Their courage and resilience in making it to the other side of dire made one Hell of an impression on me!

Here’s the thing: we get what we get, you know? Life hands out the cards, and the issue isn’t about whether or not you have an acceptable hand. Grace or lack thereof comes in exclusively via how we play the cards we get. Reaching upward, for a higher perspective, a bigger picture, a way to go on and live, helps us out of the hole. Bonus points for making good with the hard-earned lessons. This is the function of faith. If yours doesn’t fit, shed it and seek one that does.

Have you had a crisis of Faith? How did you resolve it?

Five of Cups, Legacy of the Divine, Tarot Fives, The Hierophant