It was probably more than a year ago that I first started feeling the need to streamline and simplify…It wasn’t a big, grandiose revelation. Nothing like you’d see in a movie.

More like I had a very a gentle but persistent urge to make even little aspects of my life simpler.

Reduce clutter and organize more.  Cut out aspects of my life that demanded more than their fair share of  time, energy or attention in relation to the payoff.

I wasn’t sure why I was getting this pull. Nonetheless, I’ve discovered I don’t need to know why. I usually don’t until much later anyway. So I did my best to listen, even in–or maybe mostly in–very small ways.

I ditched that over-complicated coffee pot that kept breaking. I cancelled underutilized subscriptions. I replaced the sometimes-fussy Cat Genie with a litterbox service. I got organizers and used them. Mostly, I spent time cleaning and purging and just in general, rethinking my day-to-day processes.

I won’t say it was a huge or even outwardly notable transformation, but it did make a difference.

This week’s Tarot reminds me of that heads up, and what is was all about for me. More importantly for us, though, perhaps the similar nudge from this week’s cards will serve you as well.

This Week in Tarot

The draw this week was done in the “between spaces.” I knew I was had to be gone a few days and I wasn’t sure how things would shape up. So we’ve got a weekly draw laid out on my sweatpants-clad knee, while the light played tricks on Thor the Warrior Kitten’s eyes. No bandwidth for fancier photos this week. But that’s okay.

The best we can do in a given moment is always enough. <<= This is important. 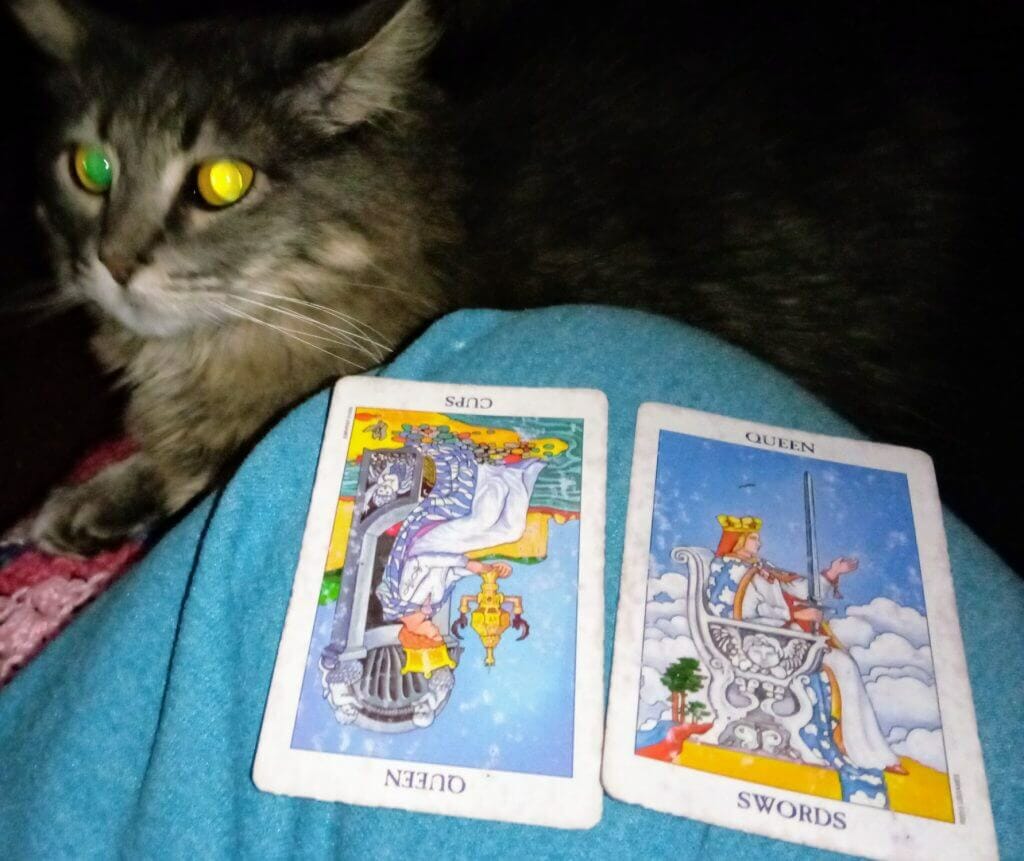 Outlook is the Queen of Cups reversed, with advice coming in as the Queen of Swords. Cards pictured are from the Radiant Rider-Waite in a Tin. Man. Sometimes, I could stand for literal Tarot being slightly less literal.

A reversed Queen of Cups can point to bouts of emotional turmoil–distress, heaviness, worry, fear, or just a generalized hyper-emotionality. The form it takes is less relevant than understanding the power of the emotional states.

In other words, expect lots of feels: maybe even enough to be overwhelming at times.

This is okay. It’s kind of got to be, since we often don’t feel like we’ve a choice in the matter. No matter what, be gentle with yourself.

As far as advice, the Queen of Swords is all about practicality. Streamline. Simplify, Prioritize. Triage. Discriminate. Eliminate. Let goals and logic be your guide. If it doesn’t contribute to what you need right now, let it fall by the wayside. That includes guilt, by the way. Guilt doesn’t make us more efficient and it certainly doesn’t make doing what we need to do easier. So let’s ditch it, along with anything else that isn’t helping. This process will help us stabilize and keep moving forward.

Do you have some of the feels? And do you see ways you can streamline and simplify to help manage?