You know how people seem to call you, right as you’re thinking about them? This isn’t coincidence.

We all put out and receive vibes. But certain times or circumstances impact the clarity and volume of the connection. Next week, the connection is gonna be loud.

I didn’t realize it until I put the video together, but I had the same exact draw as two weeks ago. And we’ve got that darned Page of Cups showing up AGAIN… 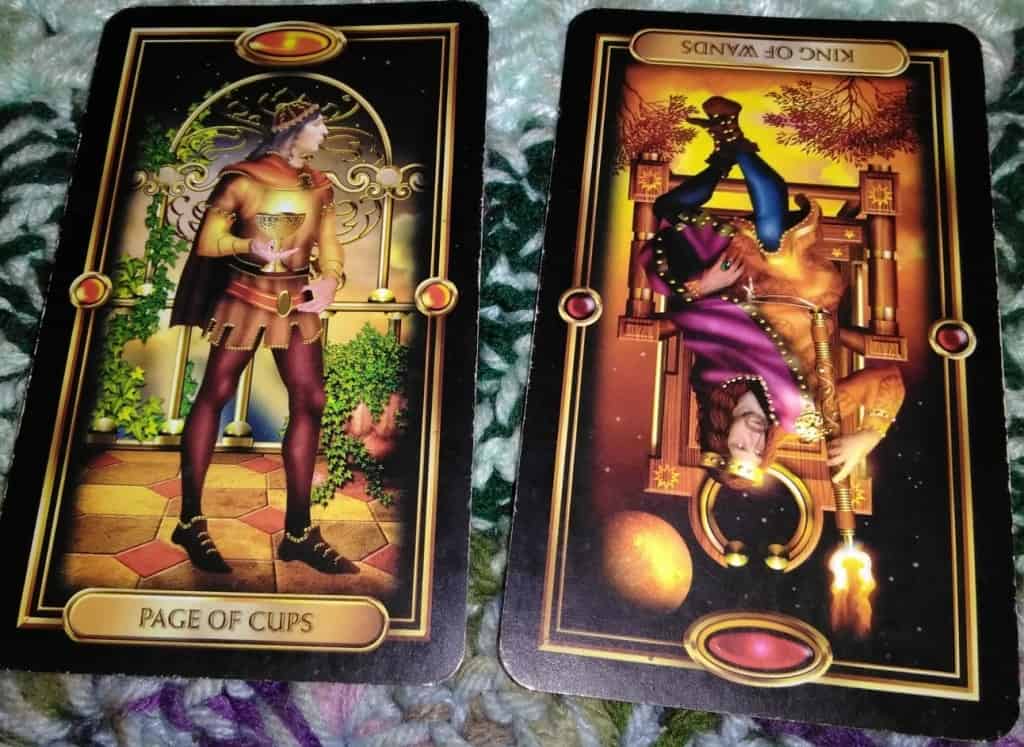 Outlook is the Page of Cups. Advice, the reversed King of Wands. Deck is Gilded Tarot. Expect emotionality to reign supreme (again) this week. Know that intense emotions can be sent as well as received.

So be mindful of the feelings you’re projecting. People will be able to “hear” us thinking about them–probably including people who usually wouldn’t notice. The King of Wands reversed suggests we’re thinking pretty loud, in that sense and some of us will be pissed. Be wary of tendency to “think-shout,” because it’s exaggerated with the upward influx of emotion.

The reversed King of Wands for advice would suggest we not go into anything with guns a-blazing, demanding or attempting to control how things will go down. It tends not to end well.

Tread lightly and understand, it’s not just you. It’s an emotional time. Be well out there, friends!

And here’s a video version of the forecast.

Are you ready? We got another squishy week coming, so hang on.

Next week for the outlook, we have the page of Cups again or again-again since we’ve been getting it all over the place.

And for advice, we’ve got the reversed King of Wands. I want to focus particularly on how strong emotionality and intense feelings make for psychic projections. So basically, I’m thinking in terms of if you’re thinking really hard about somebody next week or you’re particularly worked up or upset about something on some level, I expect people to get the message that you’re sending out with those thoughts and feelings. So if there’s somebody you don’t want to talk to, might not want to focus on it or focus on them or what bothers you about them specifically.

But beyond that, with the reverse King of Wands as advice, I want to suggest that you don’t go in guns blazing.

And putting your foot down and saying this is the way it is, rrrrrrr. Because the outcome is not likely to be pretty.

OK. Instead hang back a little bit. Don’t try to control.

And for the as far as the emotions that you are feeling, I mean, you feel what you feel. Emotions aren’t right or wrong, but sometimes you can steer them.

So if you can steer them towards a more kind, loving, accepting, warm way of looking at the world, it’ll do you and everybody else good.

Now, I know this isn’t always the easiest advice to take, and I am kind of in the unique, well, unique maybe isn’t the right word.

I am in the sometimes unenviable position of needing to take the advice that I give. Like, that’s pretty much a thing. OK, if you read cards at all or if you work with astrology, you do any of this kind of work, what you will find is that you will be giving out advice that just as much, if not more so, is meant for you as for anybody else.

So don’t think I’m just handing this all out indiscriminately. I’m trying to listen to my own advice too. Rein it in. Don’t don’t go in guns blazing or it won’t turn out well. OK, but otherwise, look for the kindest, most compassionate approach to not just other people, not just interactions, but also to your thoughts that you can manage. And it’ll make the week a better one. OK, that’s what I got for you. I hope it’s helpful.

And wish you the best.

Peace out from the Zen Goddess. Bye bye.