Page of Wands, 9 of Pents Rx: Not Quite Ripe

You ever find yourself getting wound up about something relatively small, maybe not even real, until you wind up playing it in a loop in your head?

If you see me speaking animatedly to myself in the kitchen, that’s probably what is going on! I’m telling somebody off in my head.

I’ve been kind of keyed up, you know? I use the example of an unpleasant scenario, but it’s just as true that I can react intensely to the positive emotions as well.

It’s not just pleasant or unpleasant emotions right now. It’s just a LOT of them, whatever flavor. I am expecting the next few days to be like this for people in general.

Outlook is “Playfulness,” aka the Page of Wands. Advice is “Ripeness” reversed, better known as the Nine of Pentacles. Cards this week are from the Osho Zen Tarot. 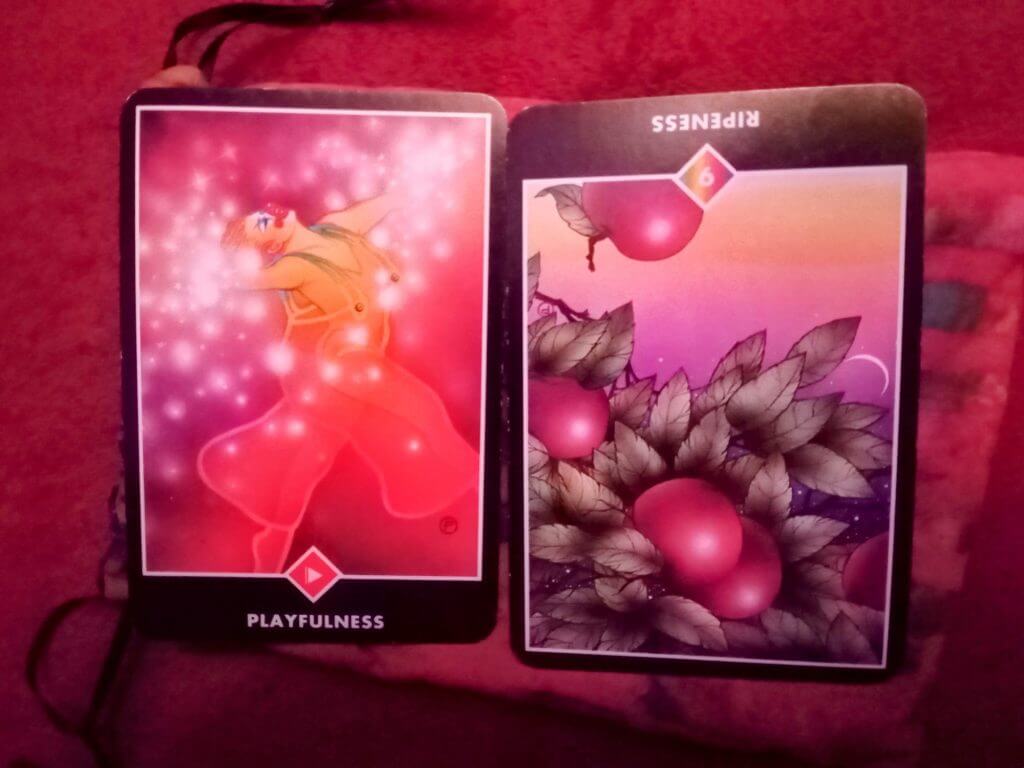 Well, “playfulness” sounds like a lovely energy for a forecast. Taking a cue from the traditional version of the Page of Wands, I’d expect to see some passion, intensity and enthusiasm for whatever projects people are engaging with. So far, so good.

But…that’s not the whole shebang here. Do be aware: folks may feel strongly enough about whatever that they may not take well to being contradicted or challenged. Anything that could be seen as getting in the way of their goals? Not going to be well-received. Folks could become undone–even the super chill folks like me–so you don’t want to put yourself in the line of fire for that.

Instead, let’s take the cards’ advice here. Let it ripen. Look for the parts you are content with, look for points of satisfaction, and expect the rest to work itself out. (Do you all get tired of me telling you to let the Universe work things out? Because really, I’m coaching myself on that approach every bit as much as you all. Probably more.)

Here’s hoping your passion this week is the playful, creative kind and that you’re mostly satisfied with where it goes. Take care out there, friends!

Please note: I don't interpret Tarot draws posted in the comments.  Feel free to search the (thousands of) posts here for insight on how I read specifics cards or just hire me for a personal consultation.