Page of Cups & King of Wands: Writing Your Own Reality

How much choice do we really have? I mean, about anything?

When I was getting ready to move to help out my folks, I kept getting the same message: “It’s your choice., Dixie.” Loud, even. From multiple sources, in multiple ways, but the same message. And it threw me off a little.

Hadn’t I already made that choice? I thought so. I had decided I wanted to help and was already neck deep in the process of rearranging my world in order to do that. I knew if I’d said “no” that would have been the end of it. So what’s all this hubaloo about it being my choice?

I’m thinking now, it was more about the experience I was creating for myself–feeling hemmed in between different people’s desires and needs, no way to satisfy everyone and everything. And me, what I wanted, was getting a little lost in the process.

Ultimately, I ended up making some decisions about what works best for me that others didn’t see the same way. It’s worked out fine for me (and frankly much better than it would have if I’d tried to follow someone else’s instincts). But on those days when I wasn’t feeling as confident, it was hard.

Not that it’s a one-and-done thing for me. Not by a long shot! Still trying to make sense of my own world.  But in all fairness, that’s really a lifetime goal. Right?

We have “Understanding,” aka Page of Cups as outlook with “The Creator” aka King of Wands from Osho Zen Tarot. Both cards came up reversed. So think of the forecast this week as being in progress, a process and not quite where we’re at just yet. 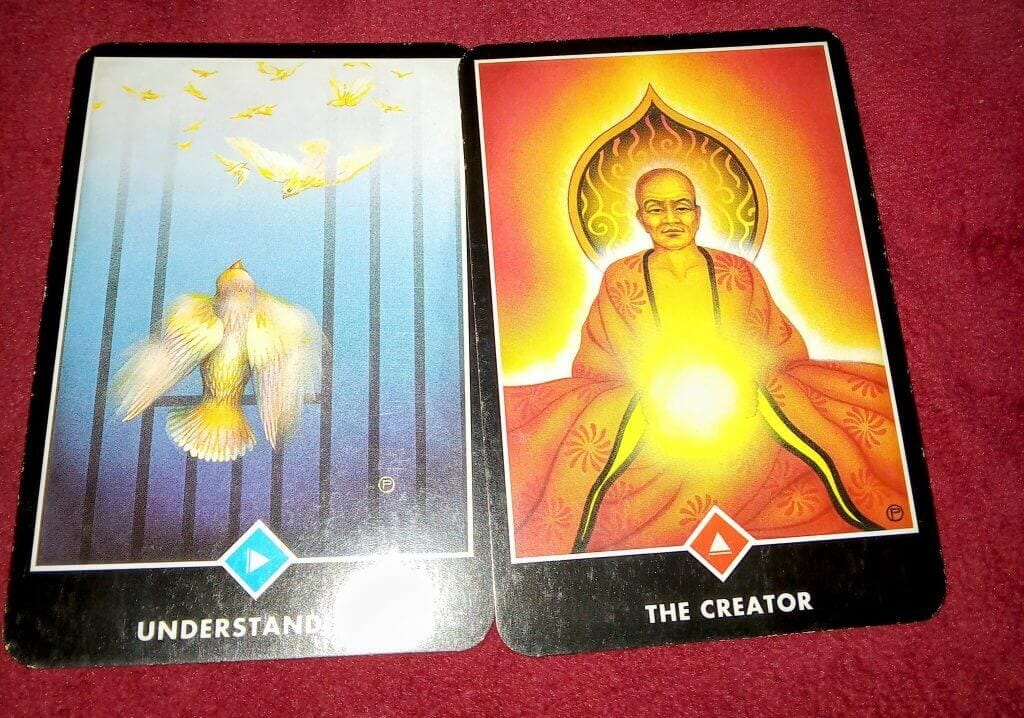 Maybe you don’t feel free. You haven’t got the memo yet, you can do what you want! But you know what? You’re as free as you let yourself be.

The reality which you accept, the one you play by, the one you decide is the truest of true? THAT is what defines your experience. Facts and events can be exactly the same, but your personal experience living with those details is more about how you frame the experience than any sort of greater reality. No one else has control over how you choose to interpret the world. That’s only you…

So it goes like this: you consider what you see before you. Maybe you wonder or worry or don’t like some of it. Fair enough!

But the advice is pretty simple here. Become a direct creator by taking charge about the stories you are telling yourself. Stop worrying about what is most “true.” Truth is an elusive target at best and most often just gets defined by what seems most plausible to use based on our own past experiences and very limited information.

In short, although we often don’t realize, our perception of “truth” is much more an emotional conclusion than an empirical one. Use this to your advantage! Create a backstory that works for you. What goes on in the outside world is not your choice but what goes on in your inner world? THAT you largely have control over. So exercise it.

King of Wands takes control. He manages his own script and makes his own decisions. He’s passionate, fair, and focused. He decides what works for him and discards what does not. He knows his goals. We may not be feeling the full force of his energy yet, but you can look for it and take his counsel to heart.

This is a week to take note of your own power, even if (or especially if) it’s internal. That’s the most powerful kind of power, after all. You are to set the tone and let the world adjust to it.

Stay safe out there, friends!