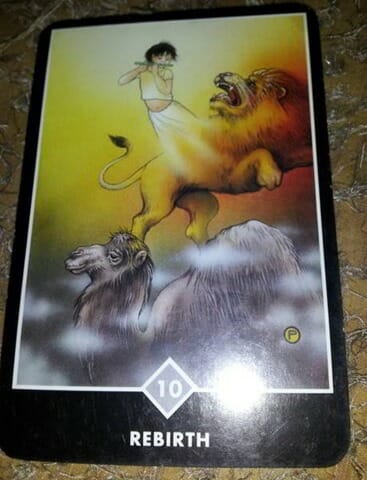 I’ll admit it. I titled this post with “Ten of Clouds” instead of “Ten of Swords” because…well, the Ten of Swords sucks! In the Osho Zen explanatory book, it talks of the story of the Camel (complacent), the lion (confrontational) and the child (growth) that comes from transformation through the other phases.

Eh, I dunno. I haven’t read the story the image is based upon.

I say, don’t be a dullard and let people ride your back all day, everyday, in effort to be “nice.” Don’t be so oversensitive that you growl menacingly at everybody who comes close. Just as with the the traditional Ten of Swords, some will betray or or sometimes, you’ll overreact to those who had no intention of doing any such thing. The card can speak to either situation. It’s all in the context and it takes a fresh perspective (the child) to determine.

Today,approach every person, every quandary, every situation on it’s own merits and nothing else. Forget what others might think, or who might be out to get what. Just…take it in, as it is. Use your brain! Swords, er…ah, clouds is a mental Tarot suit. Weight it out. Neither underreact or overreact.

Let time and patience clear up any cloudiness remaining, because you know what? It always will.

How are you about taking things at face value?

P.S. Have a safe and happy Mercury Retrograde!

Schedule a session with Dixie.