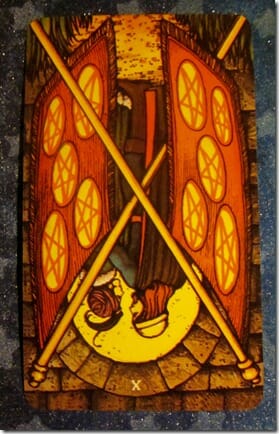 Over the last five years or so, my conception of who is my “family” has shifted significantly, albeit unconsciously. It still is in flux and probably always will be, truth be told.

I never planned to redefine “family” every other Christmas! More than anything, people coming and going from my life have forced me to redefine my tribe, lest I find myself seriously lacking on that front. This works pretty well, unless or until remaining family disowns you.

Today’s Tarot is the Inverted Ten of Pentacles, aka “The Lord of Wealth,” associated with Mercury in Virgo. Like all Tarot tens, we are simultaneously ending one cycle and beginning another. Often, this card heralds family celebrations, along with a sense of prosperity and community. It’s all about what makes you feel abundant and prosperous, centering on home and heath.

I talk sometimes about my biological relatives. They are Jehovah’s Witnesses and in case it’s not glaringly apparent—well, I am not. This makes me persona non grata at family functions. Oh well, you know? The break happened over a quarter century ago, so I’d be a mighty slow processor if I was still mourning it much. But that’s not to say it never tweaks me.

Instead, I turned to other sources for a sense of community. My husband, children and friends have all served at times, as well as a number of “online families.” In the rare event I actually feel at home, I mentally adopt those folks! This works pretty well, except when it doesn’t.

My seventh house can Saturn in Pisces can erase relationships as if they never existed. Square a 10th House moon, this process is generally painful and very often, public. For example, upon leaving the Witnesses, it was publicly announced I was being expelled “for conduct unbecoming a Christian.” (Translation: not claiming I still believed the doctrine.) On the rare occasions where it doesn’t go down that way, I’m terribly grateful. But however it goes down, it is and always will be difficult. That’s the nature of this beast, you know?

The inverted Ten of Pentacles suggests that love (Venus) can indeed be a practical (Virgo) matter. While those we recognize as family may not always wholeheartedly accept us as such, we can continue to welcome those who do, and focus on the elements of family and abundance still present in our daily lives. If you’ve distanced from your family for whatever reason, look for other kindred souls to take their place. Individual perception of family may not be more powerful or than blood ties, but it certainly can take the edge off. Get your dinner where you’re best fed.

Does your sense of who your family is change?

Three of Swords: Step Back