Eight of Cups Rx: Not Forgotten

You ever have something you’re upset about, but no matter what you do, it feels like it’s just running endless thought-circles in your head?

This happens sometimes when the issue doesn’t have a clear path to resolution. Maybe it’s just too murky. Maybe there isn’t really a fix. Maybe I am not in the position to implement improvements. Maybe I’m sorting through a big, fat basket of the unknown.

So what do you do with the worry or sadness that you cannot think your way out of (asks Gemini moon)?

You accept it, ultimately.

I mean, what option do you really have?

But once you do accept it, feel all the feelings, it really does help. The weight lifts and there is room for new thoughts in your head again. I expect next week to go a bit like this… 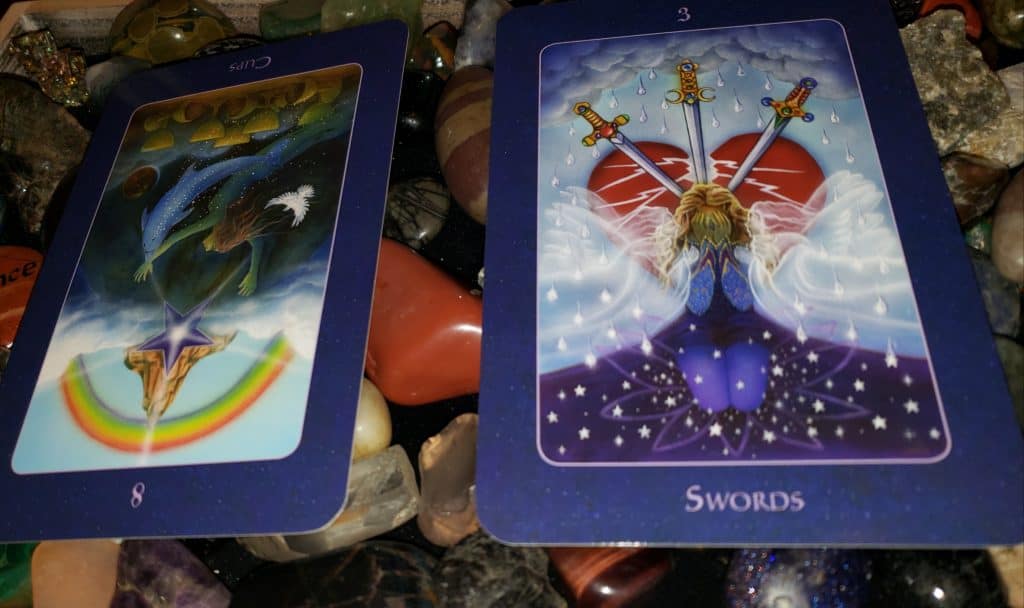 The next week is still coming through on the raw side, with Eight of Cups reversed as the outlook and Three of Swords (!) as advice. Cards pictured from my beloved Star Tarot deck.

People may be having a hard time leaving the past in the past or “just letting go” of whatever this coming week. It is what it is.

Instead of fighting those feelings, advice from the Three of Swords would be along the lines of frankly acknowledging losses. Cry your tears, as many as you have. The losses are real and they don’t hurt any less when you deny them. They do hurt a little less if you allow yourself to process them, as they come up.

This is because the whole “paint on a happy face” and “fake it ’til you make it” coping methods aren’t doing squat. They are inauthentic because they aren’t based in truth.

I’m more of a Pollyanna than most, without a doubt. I will ALWAYS suggest we look for the best in any situation and focus primarily on what’s good. But I’m not an idiot. I know that before the new is built, the old dies off. It’s part of the natural cycle.

If you’re having trouble letting go, be honest about how you feel. It’s cleansing and it helps. It’s not until we’ve accepted and mourned the spilled cups that we can turn our attention to the remaining cups, still standing.

There will always be cups still standing. It’s fine if you don’t see them right away. You will.