Anytime I feel the urge to go running off at the mouth (and sometimes that urge is strong), it’s a very strong indication I need to stop, step back and achieve some distance.

I know, it’s less cathartic than verbal purging. But I’m also far less likely to have something to regret at the end of the day.

I know how far along I am in emotional processing around any issue by how I feel. When I feel riled up, I’m just not done.

I noticed this week, I seem to think I’m “done” emotionally processing something at least twelve times before I get anywhere near an approximation of peace. Many of these false starts–or is it false stops?–well, I’m ready to hop right in there and give some people what for. Thank God I don’t always do that.

I’m expecting the coming days to feel a lot like this.

I had my working deck out already–the mini Radiant Rider-Waite–because I was working. So that’s what we used. 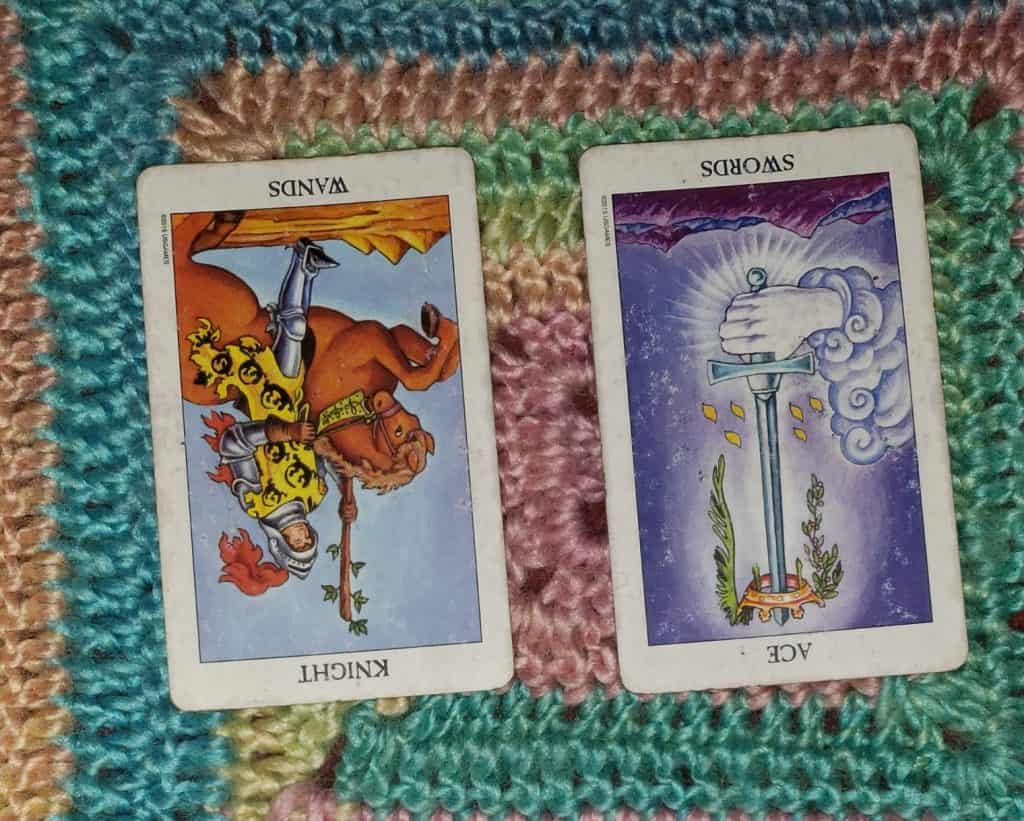 Don’t go dashing about to solve this or head off that, even if you really want to (and you probably do). Slow down, Sparky!

You know that old saying, “Measure twice, cut once?? This week, it might not be even 100% clear you’re measuring the right thing. That reversed Ace of Swords wouldn’t have us pulling out the scissors quite yet, lest we make cuts that cannot be repaired.

This is very much a “don’t-try-to-force-anything” vibe. Passions are likely to run hotter than facts, and details emerging may be misleading at best.

So does that mean you’ve got to sit around on your hands while you’re itching to get rocking? Not exactly. Just work on the peripheral concerns, like constructing a supportive structure for what you’re getting ready to do next. Organize, plan, and set the stage.

You can be very productive. I just wouldn’t advisee being very confrontational. Lay (foundational) bricks. Set aside the explosives for another day, okay? Nothing too cutting or too final should be the focus. Think more prep for what is to come than the actual what is to come bits.

So maybe you’re still processing, as I have been. Maybe there is something you’ve not figured out yet, or some relevant detail that has yet to be revealed. Maybe your feelings are just too inflamed to allow your better judgement (and kindest nature) to fully shine through. Maybe somebody is getting ready to surprise you.

Whatever it is, it’s not yet done and we’d be best off chilling just a bit. Foundation work is great, and will never go to waste. Organization, setting up a supportive structure, and making plans are all great uses of our time next week.

In other words, don’t face your future with a bulldozer in the days ahead. Instead, start mapping out the cornerstones of where you’re going to build, because that’s going to serve you. Blowing stuff up will not.

Be kind out there–to yourself and everybody else!