A few times now, my husband and I have talked about how unclear the future is for us right now.  Not unclear in the general, impacts everybody way, although obviously, that’s true. But more like we’re playing EVERYTHING by ear right now.

None of it has felt bad. In fact, almost all of the changes have delivered benefits without doubt, but it has still been sort of disorienting.

So, any attempts at micromanaging the day-to-day realities of my life right now? Pretty likely to blow up in my face. Therefore, best not to try. Next week, I’m thinking it’s going to be kind of like this in general. 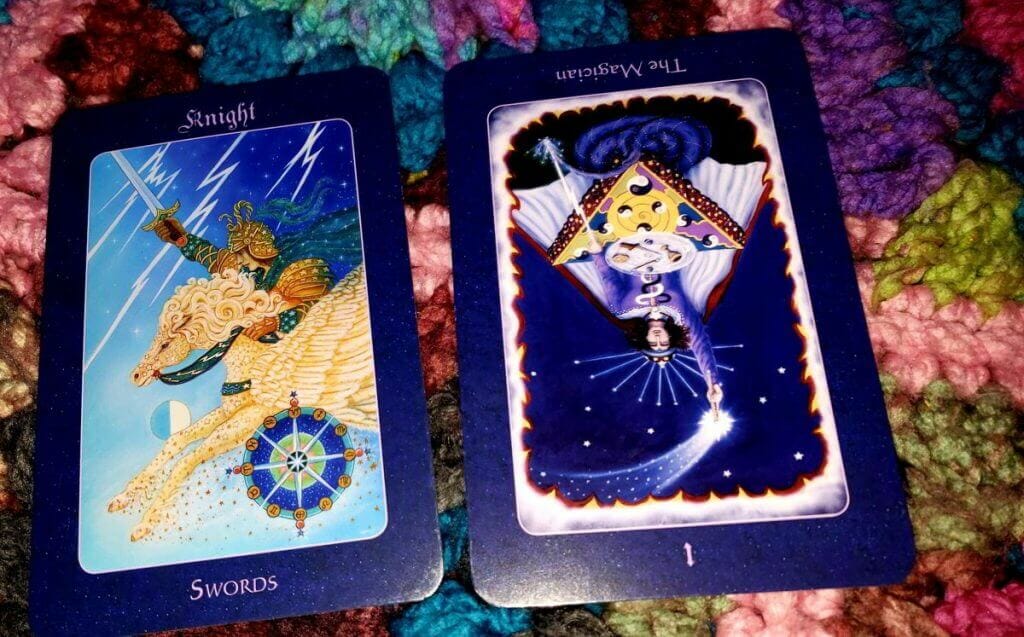 For outlook, we have the Knight of Swords with advice from the reversed Magician.

Aside: Not shocked to see that Knight of Swords, since Mercury is slated to go direct this week. Who is up for that?!

Because the MercRx hijinks I saw this time around were flat out frustrating. Since my chart is Mercury-heavy, I tend to get a birds’ eye view of what it’s like for everyone else. So I’m thinking I’m far from alone in being happy about this astrological shift.

We can definitely expect motion this week, with fast-shifting details being the norm says the Knight of Swords. In fact, it’s entirely possible you may completely change your mind about what you want. So be quick to consider but slower to commitment: sort of the Universal equivalent to the “measure twice, cut once” adage.

That reversed Magician would have us keep all the motion at a slight distance, however. Meaning: if you don’t like what you see at a given moment, don’t jump all over it and try to adjust it in one fell swoop. Instead, take a step back.

Be prepared to be flexible–either in how you go about getting where you want to go, or even altering the destination as you go. Is this easy? Not always. Is it helpful? Often–and without question, it will be this week!

In fact, this whole setup has a “play it by ear” vibe. That means take plenty of time for deep breaths along the way, take your time, and leave it all “in the shopping cart” until you’re sure you want to check out. Overcome obstalces this week softly, not directly. So whatever doesn’t meet your fancy, step back. Wait and watch. Let the tide turn or other options present themselves, because one or the other will happen, perhaps several times.

In short: Expect motion next week, some of which will no doubt be to your liking. Whatever is not, though, sit it out and see what the wind brings because the wind will be changing on the regular. Woot for Mercury direct! It will help things feel better. Biggest thing, always, is doing your best to feel good yourself, though!