Rx King of Wands & Queen of Pentacles: Just Be Useful

I was sooooooo nervous, before I moved down here to help out my folks.

I mean, I didn’t know thing one about caregiving. I have never done anything like this before. How would I know what to do? How could I possibly think of everything that could go wrong and devise a plan for avoiding it all? (That’s my Virgo, nagging.)

It’s not really been like that, though. Thank the Gods!

It’s been so much more about showing up and looking to be helpful, useful–that’s such a Virgo word too: “useful.”

During the coming days, look to offer (or accept) useful caring in your own life. It makes far more difference than you might expect.

Outlook is reversed King of Wands, with advice coming in as the softer Queen of Pentacles (or Coins, here). Cards from Legacy of the Divine deck. 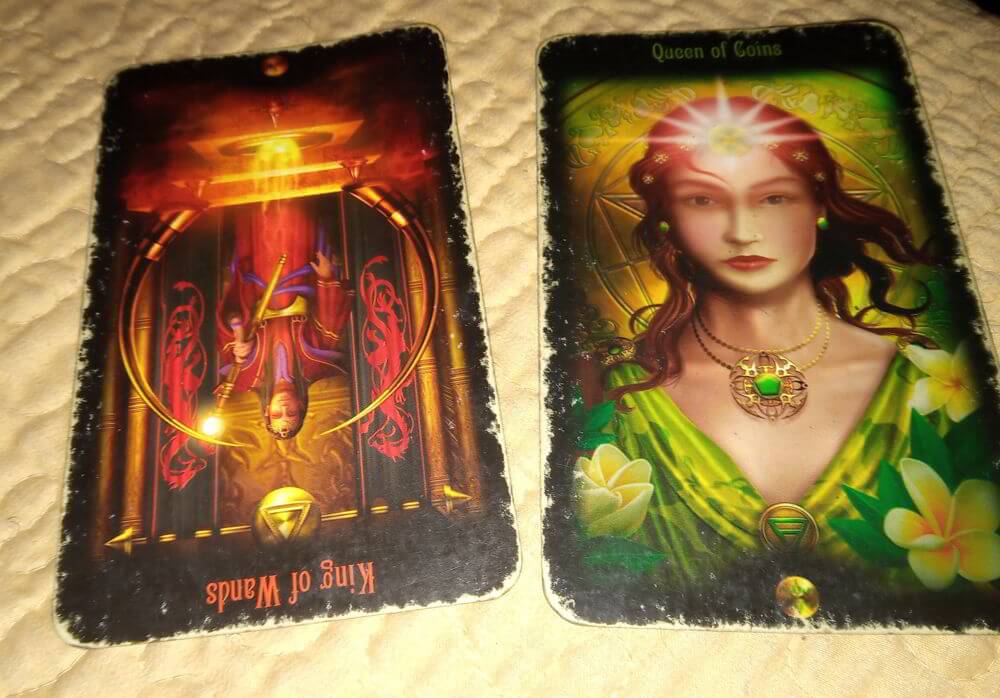 The King of Wands is going to want to push forward, to lead and direct and declare what’s what here.  He does not suffer fools and doesn’t put things off. He is very much an action-taker.

And leader? Oh my yes! He leads by example, sure, but also frequently by proclamation. He’s not shy in that regard. So, if you don’t follow his well-crafted example? He’ll let you know–along with what his very clear expectations.

That’s the general feeling next week: folks looking to make things happen, and strongly suggesting others follow their lead, be it literal or metaphorical. But this King is reversed–and the King of Wands generally isn’t going to like being reversed.

Translation: We cannot just out-and-out declare ourselves boss and expect everyone to follow, no matter how convinced we are they would be so much better off for it.

Instead, we have the kind and gentle Queen of Pentacles to show us the way.  She understands everything has perfect timing and it’s not her place to determine what that looks like. She doesn’t bellow or threaten or even command to get her way.

Instead, she shows up. And she doesn’t show up empty-handed either. She’ll bring whatever is needed at the time, often physical, but sometimes, it’s lending a hand or listening or respite of one kind or another. She’ll be the breath of fresh air, the reminder it’s time to eat, the one that picks the kids, feeds the cat for you, or makes sure you have a soup stash when you are sick.

She CARES and you know it’s real because you can feel it. Because she puts her money, her energy, her resources where her mouth is. She shows up.

Next week, don’t push or proclaim. Don’t try to lead by force, intimidation or even dire warnings about what won’t happen right if you’re not heeded. Nobody is going to heed the ones speaking loudly from their own throne.

The ones making the most difference will be those on the front lines, providing sustenance, understanding and comfort. Practical help wins big this week, as well as wins over. Don’t look to aid an outcome you want. Instead, look to offer whatever’s needed and let the Universe sort out the rest.

Just know that pure love tends to be very magnetic. So if you’re wanting to attract? Anything, really. Put out love, Queen of Pentacles style.  She’s got it goin’ on!

Be well out there, friends. Much love to YOU!

King of Wands, Legacy of the Divine, Queen of Pentacles