I pulled these cards a few days ago and have been mulling them around in my head for a few days. Will that make for a better  quality forecast?

Damned if I know.

That’s just how it works for me sometimes. Cards will stick in my head and bounce around for a few days while I sort out their messages.

There is a clear theme I’m seeing, though. In the readings I’m giving as well as the weekly messages.

Ask yourself what makes you feel imprisoned, what you feel bound to because there is a really good chance you can break free right now. The crux is on how you think about it. And this week’s message falls right in line with that theme.

(It’s also annoyingly relevant to me, but that’s another column.)

Outlook was the Hermit, with advice coming in as the Reversed Hanged Man. Cards from the Radiant Rider-Waite mini. Man, these cards are starting to show their wear, aren’t they? 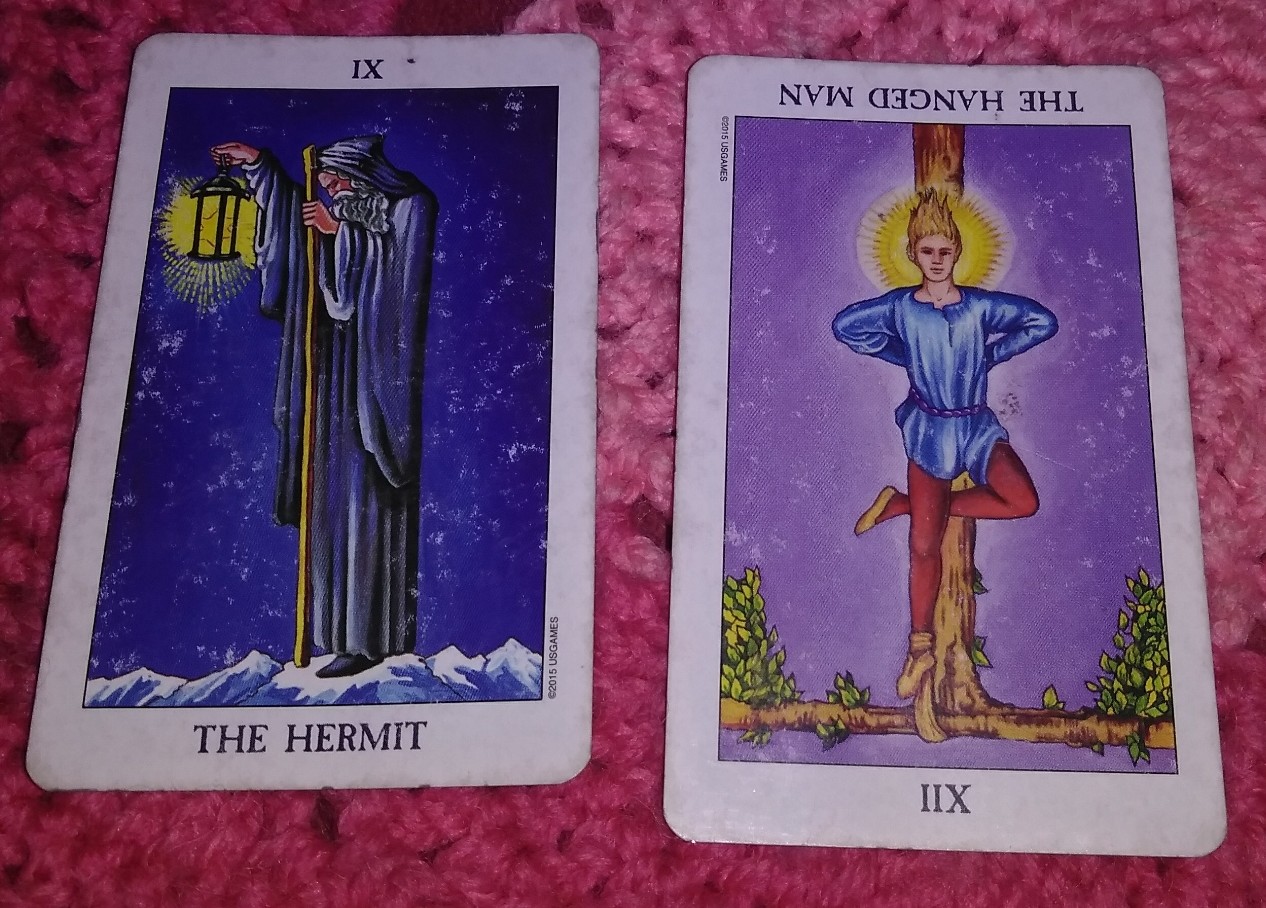 Here’s the video version of the forecast.

So I’ve been considering these cards a few days, I’m not sure if that’ll make for a better forecast or not, I’ll let you be the judge of that. Hang on.

Howdy. This is Dixie from a Fool’s Journey here with the weekly forecast. For the outlook this week, we got the Hermit and for advice I got to Hanged Man reversed.

Now, normally when I get the Hermit, I’m going to be thinking in terms of wisdom, applied knowledge, isolation, self study, you know that. But the lifestyle of the hermit. Right? In terms of an outlook, though, the way that this is striking me right now is that, by looking out at the world around you, you will gain additional knowledge and understanding.

I want to emphasize the idea that this knowledge and understanding that you gain isn’t really necessarily in fact, it isn’t especially likely to be about the world at large. Instead, your reactions, your responses, your ideas, your thoughts, your opinions and especially your emotions will give you more self-knowledge than other knowledge. It’s going to tell you more about yourself than anything else.

Now, in terms of advice reversed Hangmen is going to be confused. So expect confusion. If you follow astrology, we just started a mercury retrograde and the skies are a little odd right now. So confusion is kind of on the menu. OK, so expect confusion. You may not be able to just completely avoid any action at all. OK, that may not be an option for you. Instead, take a small, measured step towards or in the direction that you’re wanting to go.

Do not expect to make long range plans this coming week. Don’t expect for all the details of a situation or a goal, I guess, to crystallize for you, because that’s that’s not going to happen. OK, instead. Just look to do something in the direction that you want to go when you feel the urge to move and clarify, clarify, clarify, because we’re in a Mercury retrograde reviewing, editing, redoing, reworking, reimagining, whatever reset is going to be key and it’ll be especially productive.

So I know sometimes people get stressed out about Mercury retrograde. I’m heavily influenced by Mercury. And so you just kind of got to work with what you’ve got. And I find that the time and energy that I spend on review and rework during Mercury retrograde is even a lot more productive than other times. So that’s what I got for you this week. Just look at how you’re feeling and think about what that says about your perceptions, visions, goals, ideas.

And don’t expect big picture, big progress. Just understand you’re stumbling around a little bit in the fog. So, you know, take a little move this way, a little move that way and see how it feels and kind of let the confusion clear gradually because it’s going to take a while. OK, that’s what I got for you. I hope it’s helpful.

Peace out from Dixie Zen Goddess.