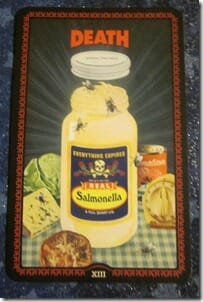 Adjusting to new realities as transitions progress is still on my radar, and it’s not just for me. Seeing it in consultation left and right; folks are in the process of getting oriented to new territory, after going through some sort of explosion, shot off amidst the Aries smack down.

Today, it’s Death or “Lord of the Gates of Death,” associated with Scorpio. Number XIII of the Trumps, it becomes one the Tarot Fours after reducing, so we’re talking about a stable condition. That jar of mayo is never returning to edible, man! If you stare at it long enough, it may turn some interesting colors. But the risk of contamination probably isn’t worth indulging an intellectual curiosity.

“There’s an empty space where the mayo used to sit and my sandwiches are never going to taste good again,” you could say. And as long as you’re there, you’ll have trouble enjoying anything else. Even the finest condiments pale in comparison to an idealized memory.  Reality can’t compete.

Or you might be tempted to nibble still—enough to get the punch without getting ill. Yeah…um… Hope that works out for you. Me? I’m thinking making friends with the mustard is a better idea! 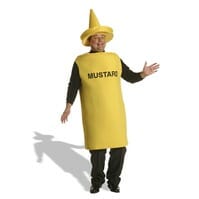 Death is such an interesting card—I know people dislike it and get why, but I usually find it encouraging. I don’t believe in “good” and “bad” cards any more than good or bad planets. There IS easy and hard, however. Death is hard. But it’s also significant—Death refers to major changes. I’ll take significant over easy any day. If you don’t make room by clearing out the old, however much it’s meant to you, you’ll not have a place in your life for the new.

Tarot reminds us to let go of the past. Some mourning is likely, but rancor is optional. The sooner you clean out the energy space, the sooner that vacuum is filled with something fresh and (hopefully) wonderful!

Have you made friends with your mustard?

Magician and King of Pents: Magical Words vs. Practical Actions