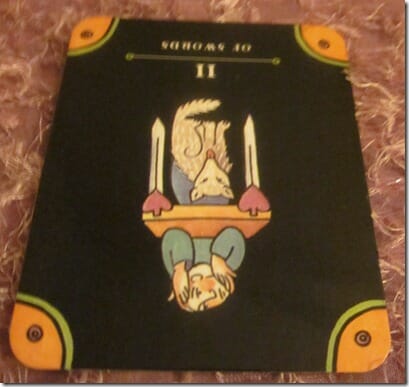 I’ve always found emotional energy builds up in physical space. The more emotional torque, the denser and more lingering the after-cloud. Fights, sadness, joy, fear, laughter—it all sticks like a scent that gets into the carpet and drapes. The smell remains remains until it’s either dissipated or absorbed by people passing through it.

Places where the same emotional tone has been repeated over long periods of time or by great numbers of people, the effect is even more striking. That emotional vibration permeates the physical space which contains it and stimulates similar feelings

Today’s Tarot forecast is the inverted Two of Swords, or Lord of Peace Restored, associated with the Moon in Libra. There is always a certain stability around this card, if tension. The polarity of the Tarot twos have a built-in sense of balance—the conflicting forces serve to stabilize one another.

The Moon in Libra would like feelings (Moon) to be pretty (Libra), but is practical enough to know that’s not always the case. Animal nature is part of who we are;  the emotional voice hits a full spectrum of  pitches.

The reversed Two of Swords suggest we stop stressing about each individual choice point, afraid we won’t measure up. Accept the contradicting pulls as part of the human experience. Shift the freed up energy to taking action that you can feel good about—always looking for whatever light you can contribute to the circumstance.

A more Zen approach lessens the burden and lifts your vibration at the same time. It puts you back in the flow, able to receive guidance and inspiration again. And it leaves you feeling a whole lot happier! Don’t worry about being perfect or making a mistake.  We do the best we can at the time, and look to grow in the process. Just commit to being the happiest, best person you know how to be. Because that’s a good place to live.

How do you do with unresolved decisions?