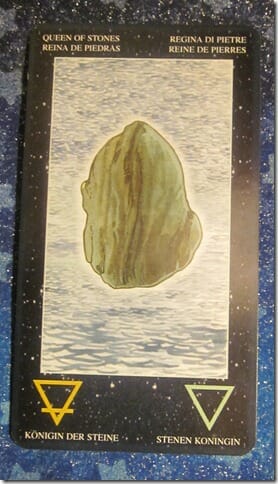 “The martyr sacrifices themselves entirely in vain. Or rather not in vain; for they make the selfish more selfish, the lazy more lazy, the narrow narrower.” –Florence Nightingale

The Queen of Pentacles is mother, not martyr. Those two so often become confused. Martyrdom,  says, “I sacrifice myself for you because you’ll sink without me. Because of all I’ve given, you owe me, and must do what I deem acceptable or feel guilt.” It may feel like love it first, especially if there’s fear and safety issues at risk, but scratch the under the gloss, it smacks of disrespect. Self-determination is one of the most basic rights.

Mothering is supportive and kind. It says, “I’m by your side. I’ll help and encourage you as you work through. I have faith in you.” Sounds nicer? It is, until a disparity in priorities crops up. That’s the real test. Acts taken in the name of someone else’s best interest begs the question, who are you really serving?

Grounding emotional energy with tangible, real-world action is the Queen’s forte. Don’t obsessively worry. Instead, DO something! It can be modest. In fact, it should be modest. Share dinner, offer a ride, help clean a room. The idea is to help with life’s heavy lifting in partnership, not instead of allowing others to do for themselves. We are all healthiest building our own muscles.  And if there is no partnership? Then let it go—it’s not ours to save others from required lessons or consequences.

The Queen of Pentacles eats at her own table—nourishing herself first, so she has strength enough to feed a crowd. She forces no one to adhere to her menu, nor starves herself to guilt diners into eating veggies. To everyone, she serves only what she feels good about providing, and allows some time between meals to restock.

You have some Queen of Pentacles in you?