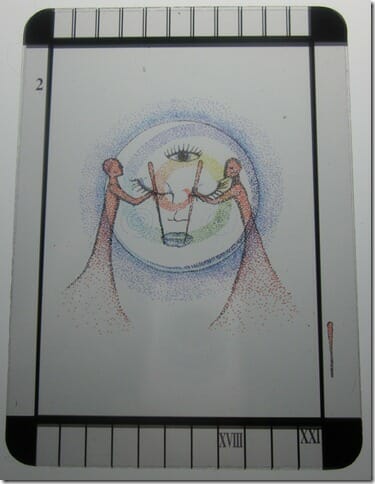 I wanted something fresh, so I reached for the Transparent Tarot. Superimposing the images triggers entirely different stories than you’d get looking at each card in isolation. It’s like visual poetry, sure to stir something up! And stir it did.

Two Major Arcana—it’s a deep, what we’re looking at. The two figures present their wands to each other, each with like force and conviction. It’s a polarity.

See how this Moon has her physical eyes closed, but her Third Eye open? Framed by the World energy—integrated, confident of her own integrity—she can afford to be generous. She understands on a deep level how differences in perspective are part of the natural order, trusting each to travel their own sacred path in their own time and way, without getting caught up in the details. Details aren’t necessary to live well here.

So the stuff that gets under my skin? The people, places and things that so often frustrate me? How about I let go of it, look higher, seek a more complete picture where everyone is exactly where they’re supposed to be, doing whatever it is they need to do? That doesn’t mean I don’t need to protect myself at times. But those times are relatively few and far between.

Today, I’m looking to be respectful of everyone I meet, whether they vibrate very much like me or very much apart. I’m going to understand, on a soul level, each of us is here, walking our own path, and that is a sacred and individual (Fool’s) journey; it’s not necessary for me to understand others’ paths; my job is to walk my own as well as I can. For everyone else, send as much love as possible when we pass.

What do you see?

8 of Pentacles: Chop the Wood with a Song in Your Heart