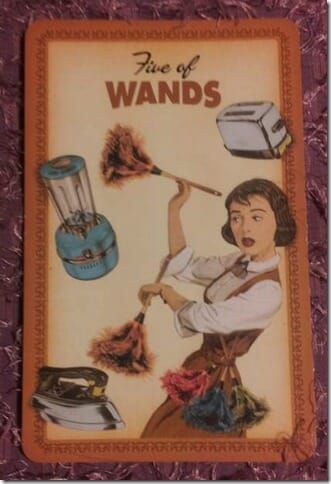 When it feels like the world is coming at you from every which way and no matter what you do, someone is going to have issue with it? Something is going to break down or fall apart or there is just some struggle that cannot be avoided no matter how much you’d like to manifest otherwise? That’s a Five of Wands day!

I try—very, very hard—to maintain my Zen. Perhaps in the trying, I miss some of the point. Wouldn’t be the first time. Ha!

What others say and do is NOT about me. Or you! But damn if it sure doesn’t feel like it sometimes, you know? When the blender won’t work or the toaster burns out, it is not the Universe conspiring. It’s not the Source abandons us.

It’s the energy, either directly, personally manifested, or perhaps necessitated by lessons or the greater rhythms of the universe at large, is such as what appears.

I won’t say I’m immune to the influence. I can use the reminder as well as anybody. Understand, it’s a time to fight through, and do so with as much patience and good humor as can be had. If it’s a lesson, surrender to it to smooth the energy flow. If it’s outside forces working against you, understand completely and utterly it’s NOT about you, because it never, ever is. People carry their own issues and you can end up as a projected actor in their movie. But accepting that role is a choice.

So today, what I’m seeing is all about trudging through any conflict, not taking it to heart so much and working through the chores that come our way as we maintain our focus and equlibrium amidst the chaos that sometimes shows up.

And that is, indeed, a victory!

Are you feeling conflict around you?

Or just schedule a Tarot consultation.

Wheel Reversed: Upside Down and Waterlogged