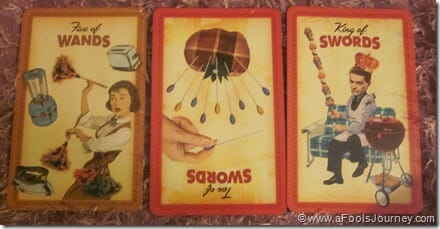 When you’re working with the cards, there will be times you get something that you don’t want. In client readings, I’ll often ask for clarification, advice or more info to deal with troublesome energy. That’s just what I did with today’s Tarot forecast.

First, I pulled the Five of Wands. Oh great—conflict! I really appreciate all Tarot has to tell me, but c’mon! The Five of Wands is a tiresome vibe. Who wants to fight?

“Okay, what do we do with this conflict, then?” I asked. The inverted Ten of Swords appeared in response. “And what kind of outcome can we expect with that approach?” yielded the King of Swords.

So let’s get to the chase.  Whatever conflict has you feeling overwhelmed? Stop taking it personally! Back off from problematic situations and detach. You’ll feel like a pincushion only as long as you allow those little attacks to remain intact in your psyche.

Other people’s issues impact you, sure, but are SO not about you. Without internalizing those little pricks of betrayal, you can make rational, considered decisions about what to accept as your reality. You get to pick what you eat.

It’s remaining attached to behavior you have no control over that messes us up. Getting a little more Zen, forgiving and releasing, gives a clarity we’d never be able to find remaining wounded. In the release is freedom.

You don’t have to manage anyone else’s conflicts. You only have to manage yourself, and keep trusting that is enough. It is, you know. That’s exactly your job here—living the best life YOU can.