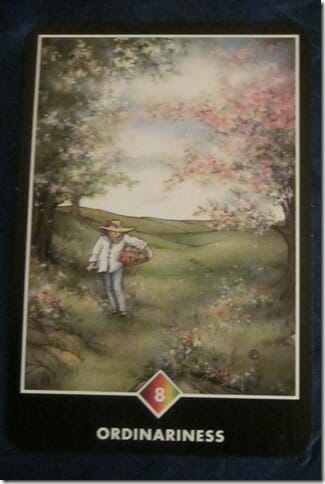 It bothers me sometimes, how bad people feel over not “getting it” soon enough, regardless of whatever “it” represents. I get it, having felt the same way myself sometimes, but it still bothers me.

I mean, we figure out what we figure out with the level of experience it takes to see in the amount of time it takes to integrate it. Saying one “should have” done so sooner implies there’s something wrong with having lessons. We don’t pop out of the womb living every second as if we’re at the end of the movie, with full knowledge and foresight, instead of living as a work in progress. Into each life some drama visits. We usually call them lessons, at least after the fact. During, feel free to throw around as many four-letter words as you like. I won’t judge you for it.

Today’s Tarot forecast is “Ordinariness,” aka the Eight of Pentacles (Rainbows) from the Osho Zen. I love this particular image—as the woman walks down the path after doing some gardening, she’s surrounded by the fruit of her efforts, right there.

There is nothing either spectacular or especially oppressive about the scene. Matter of fact, it’s beautiful! Doing her work isn’t a burden or a chore, as we often think of when we refer to “doing our work.”

When you first undertake a new skill and develop some prowess, it’s a novelty. You don’t trust your mastery so much, and may worry it will elude you when you need or perhaps that you’ll backslide. You may lament the lack of skill level in your earlier work, or fear you’ll lose your touch.

It becomes really yours as it becomes ORDINARY. And it does, through consistent practice. What once took huge concentration and focus to accomplish eventually becomes easy, second-nature.

This isn’t an indictment of where you were before. It’s celebration of where you’ve come. You can have beautiful blooms as part of your ordinary, everyday experience. And those blooms you see? Take a minute to appreciate the smell of them, congratulating yourself for the work you’ve done planting, fertilizing and tending to them all along. They don’t grow overnight. And you’re not a sucky gardener because you didn’t plant the prettiest ones long ago. Gardens change and grow as your needs and therefore the growing conditions change. It’s all part of the natural cycles of life.

Have you seen the transition from struggle to ordinary in any areas you’ve been working on?

Chariot Reversed: The How Counts