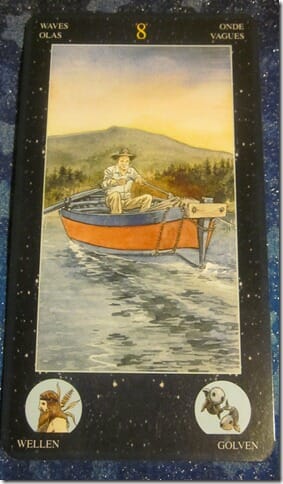 The most powerful attachments are usually not to an individual or a job or a geographical area. More often than not, the most intractable attachments are to potential—visions of what could be, exaggerated extrapolations from what is. It’s often not the present we fear leaving—it’s the future we thought we had lined up. Tarot is gently nudging us to reconsider our thinking here.

Today’s Tarot forecast is the Eight of Waves (i.e. the Eight of Cups) or Lord of Abandoned Success, associated with Saturn in Pisces. The Zodiac Tarot’s rendition is quite elegant, showing a man rowing off toward the mountains. He’s working (Saturn) his way through his watery emotion (Pisces).

You see this fellow when abandoning emotional entanglements. Often considered a harbinger of growth (the uncomfortable kind), the question suggested by the Eight of Cups is, “What are you willing to leave behind, for the sake of moving on?”

Note the cups in the RWS card have not spilled. This river hasn’t dried up—in other words, the emotional dynamic is intact. It’s just not all it was cracked up to be anymore, for whatever reason.

Having Saturn in Pisces, I do have some insight in working with this vibe. I’ve found if I get too hazy (Pisces) with boundaries (Saturn),  then fear (Saturn), restrictions (Saturn) and the demands of martyrdom (Pisces) can swallow me whole (Pisces).

On the other hand, work (Saturn) to transcend (Pisces), exercising emotional (Pisces) self-control (Saturn), seems most fruitful. The secret lies in absolute clarity about what’s yours and what’s not. Now, I’m not saying this is easy! Far from it. We care about people in our lives—how they feel and fare matters to us. But we don’t own it, we don’t choose it, and we don’t live it. We own our own lives. Nothing more, nothing less.

The Eight of Waves would have us focus on our own rowing. Know what’s your emotional work and what belongs to others. The most help you can provide to anyone else is a good example of sanity. If you’ve felt trapped in an unpleasant emotional cycle, the exit doesn’t come from changing anybody else. Even if you could (which you can’t), it would be wrong, cheating them out of their own realizations and growth process. Row your own boat, and look for kindred spirits once you reach shore.

You feeling the Eight of Cups? How?