Everyday Tarot, 07/22/11: Doublecheck before Hotfooting it | Rev. Knight of Wands 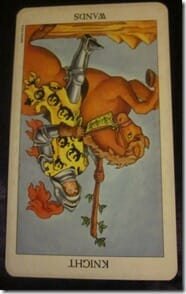 It was absolutely all I could do, not to grab the bait. Good God, I wanted to snark back! I started to, several times. But then, I stopped myself and a deep breath.

“What do you hope to accomplish here, Dixie?”  I mean, really, what could I expect? That he’d have a sudden Come-to-Jesus moment because of my magical retort?  He knew he was being an ass. He was going out of his way to be an ass. So, I could either grant him the buzz of noticeably disturbing me with his assiness, or I could email-filter that irritation right out of my reality. I don’t have to tell you which I picked.

Today’s Tarot forecast is the Knight of Wands or “Prince of the Chariot of Fire,” associated with Air in Fire. He’s inverted, naturally, because we’re all so damn hot to trot about moving forward now—he’s got to show up as the royal party pooper, suggesting we’ll have to keep ourselves under control.

Knights have a tendency to get carried away anyhow—with ideas and ideals. They are enthusiastic, but not necessarily experienced, so we are probably looking at a raw, edgy quality surrounding circumstance. It’s bold, vivid and in full color, but reversed, it may be unfinished or incomplete.

The inverted Knight of Wands cautions us to make sure the direction we’re charging is aligned with the intended destination. The strong, sudden urge to just do is not sufficient indication of helpful, productive action. If your compass agrees, carry on! Otherwise, restrain yourself, Sparky. Don’t want to burn down the wrong house.

You have the urge to run?