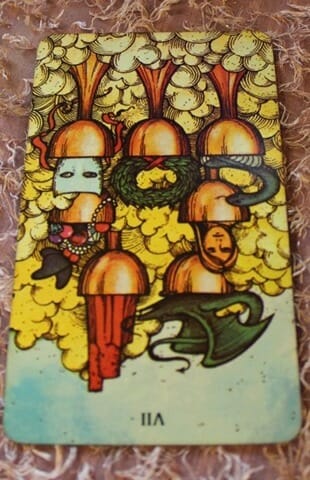 You don’t know what you don’t know. That’s what the reversed Seven of Cups is mumbling in my ear. At least, I think that’s what he’s saying. Or she. This is a shifty one, this card!

You remember that party game of telephone line? Where one person whispers something to the next person, just once, and it goes around the room? Today is like that.

What you’re hearing may have nothing to do with what reality. Expect to be getting partial and distorted information. Maybe it was a lie, maybe a misunderstanding, maybe a bit of plain ol’ garden-variety insanity that got things where they are, but I’d say it’s likely everything is not as it appears at the moment.

Put your “Jump to Conclusions” mat away, because if you hop on it today, it could well slip out from under your feet. Nobody needs an nasty spill like that.

Am I saying those conclusions would be wrong? Hell no! Just that we don’t know.

What do do with it? Wait it out, of course. Pay more attention to the urges to ram headfirst than the “facts” upon which the urges are based. And as far as action, give it a minute, will ya?

You trying to make your way through a fog?