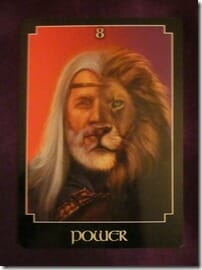 “It is better to conquer yourself than to win a thousand battles. Then the victory is yours. It cannot be taken from you, not by angels or by demons, heaven or hell.” –Buddha

Usually, when you hear someone described as “stubborn,” it’s considered a bad thing. At times, though, it serves. Really, it’s all dependent on what you are stubborn about, you know? If the issue belongs to you, and is tied up with your deeper convictions, then yes, dig your heels in. It’s important!

Otherwise…well, maybe not so much. It’s always a question of choosing your battles. If carefully chosen, there’s little temptation to give up before winning.

Today’s Tarot is “Power,” better known as Strength or as the “Daughter of the Flaming Sword,” associated with Leo. The power we’re talking here is internal, borne of clear goals and dedication over the long haul. Tarot Eights promise stability and reward for sustained effort. You’ll very often see this card when someone is wondering if they are up to a challenge—and it answers a resounding “Yes!” The outcome is dependent upon level of commitment. You’ll also sometimes see this card to identify a Leo, as if a Leo needs announcing. Ha! 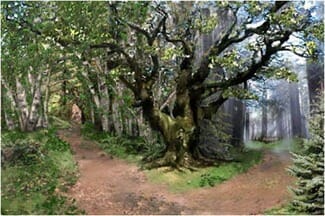 If you’re facing a standoff, the depth of your convictions is what gives you this power to prevail, so be crystal clear before you start. Wishy-washy will not cut it! When I rejected my family’s religion, my family rejected me. When my husband and I made choices about how much drama we’d tolerate, our relationship with certain family members spontaneously combusted.

Crossroads appear in every life. If you don’t already know what direction you want to travel, there can be significant temptation to take the wider, easier path—even when it leads directly away from where you want to go. Without your conviction going in, you’re travelling without a compass.

This is the true secret of the Strength Card—while the fight may be played out externally, the real battle takes place within our own hearts and minds. The infinity symbol in the tradition rendition promises an ever-available source of power to gently, but firmly master the opposing forces to come out victorious.