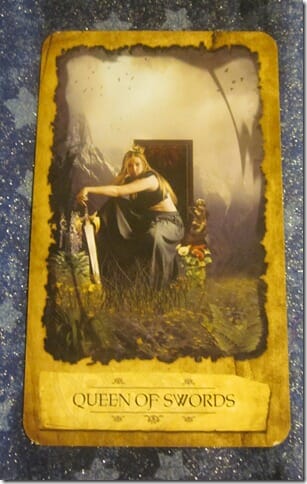 As someone who counsels others, I’m not without awareness it’s a whole lot easier to give suggestions than to take them. Knowing intellectually and knowing emotionally are two entirely different animals, and the twain doesn’t always meet. Feelings are a strength, but it also takes strength to manage them!

Today’s Tarot is the Queen of Swords, or “Queen of the Thrones of Air,” associated with Water in Air. She is able to bridge that gap between the intellectual and emotional, doing what needs to be done.

Some folks read this queen as cold or calculating, but I don’t buy that for a minute! Just because her feelings don’t dictate her decisions doesn’t mean she’s lacking in empathy. It may even be she has so many feelings, she uses the rational power (Air) of her suit to compensate, and thus her to function. For this queen, the bottom line has the final say.

In other words, the Queen of Swords is not a bitch! She’s a pragmatist. There is a big difference. She prunes what’s no longer working, even while sentimental notions of what was once beautiful continues to tug at her heartstrings. She still makes sound decisions, damn it, often based on a cost-benefit analysis. She keeps the greater good in mind doing what needs to be done to defend herself and loved ones.

The Queen of Cups or the Queen of Pentacles may win more popularity awards. They feel a lot more nurturing and motherly. But we can turn to the Queen of Swords to get the hard jobs done—effectively. She’s formidable to any who would stand in her way, and is exactly the kind of person you’d want on your side when you need a tough job accomplished.

I’ve called upon the Queen of Swords energy when dealing with substance abuse in family members, making important decisions about my future, and even managing sticky interpersonal problems for an online community. The reality-based, outcome-oriented approach can save much grief if wielded with a Queen’s compassion. The Water and Air energy compliments, each supporting the other.

Call on the Queen of Swords when you have a tough job to do—she can slice right through the bullshit, thwart any would-be obstacles, and make sure the outcome is executed fairly and with an even hand. Because she’s already thought it through, she can slay dragons without dangerous hesitation or regret. That’s a powerful ally, to have or to be.

You have any of the Queen of Swords in you?

Five of Pents and Star Rx: Be the Lighthouse