Everyday Tarot, 05/15/11: Practice What You Preach / Inverted Seven of Swords 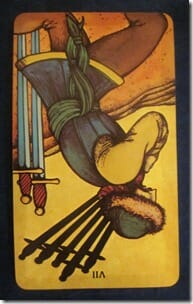 “A reputation once broken may possibly be repaired, but the world will always keep their eyes on the spot where the crack was.” –Joseph Hall

Sometimes, operating under-the-radar or without explicit permission is an excellent idea. Other times, not so much. But regardless, it’s always advisable to live in such a way you could be proud if your choices became public knowledge.

Today’s Tarot Forecast gives us the reversed Seven of Swords, the “Lord of Unstable Effort,” associated with the moon in Aquarius. Tarot sevens generally point to a solitary undertaking. As he’s running off with the swords unobserved here, look to what’s happening that’s not being acknowledged. I’ll often see this card when there is deception afoot or outright stealing. It can also relate to acting on a sudden impulse or trying to remain below the radar. Inverted, it may caution against hidden agendas or point out mixed motivations. When you see the Seven of Swords, be especially aware of factors in play that have not been directly acknowledged. 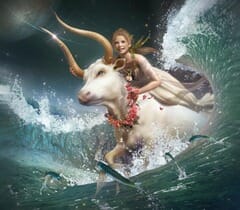 We’re moving into some concentrated Taurus energy, so be aware of typical Taurus themes: dependability, stability, and real value. Taurus is a fixed, Earth sign. So look to ways you can express this kind of energy in your own life. While it’s never a bad idea, it’s especially important during this period to BE the loyal, solid and reliable fixture.

The inverted Seven of Swords reminds us practice what we preach, with or without an audience. If you always do your best to live this way, I can guarantee you this—the day will eventually come where you’re very grateful you’ve done so. Integrity is a great insurance policy.

How much does observation impact your choices? What about people you know?