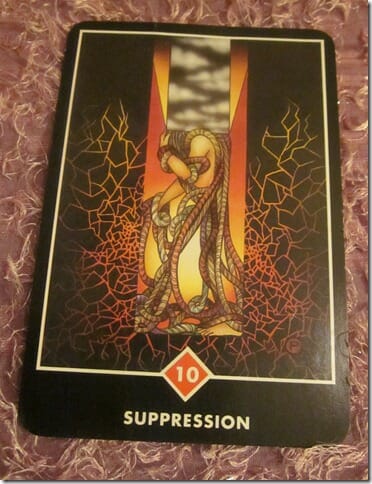 You’ll hear Tarot people talk about repeats. Best I can gather, this is an extremely widespread phenomena, and not surprising. Tarot points out truth, sometimes loud!

But I’ve also noticed some repeats are deck specific— whenever I pick up Osho Zen, odds have been 50/50 I’m going to see the card for Today’s Tarot forecast.

“Suppression” is the Ten of Fire in Osho Zen, better known as the Ten of Wands or “Lord of Oppression,” associated with Saturn in Sagittarius. Tarot tens indicate the culmination of the energy’s expression, and the Tarot Wands frequently discuss creative or work-related pursuits.

I get the Ten of Wands often enough anyway; can you say “overextend?” But Suppression has a slightly different flavor than the RWS Ten of Wands. Here, the figure is not carrying too much, but weighted down with organic-looking ropes, actually rooted into the wall. He probably could free himself—these vines are loose and there is light above him. But looking down at the ropes, he won’t notice that. He doesn’t see a way out.

Jinjan asked if I would keep the Woo-Woo coming, and I assured her I would. I’ve had big shifts on that front. 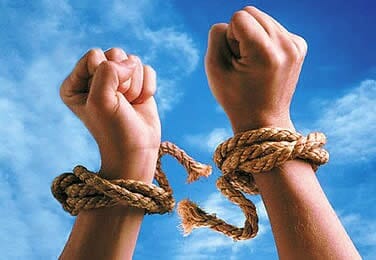 Suppression is exactly how I’ve addressed woo-woo most of my life. I just buried that part of my experience. I’d keep it to myself, marvel for a minute, and then promptly forget it. All the times I just “knew” something,  out-of-body episodes, mysterious encounters,  or magical serendipity?  Um, no.  Not opening my mouth! Like I need more ways to be identified as odd? I am already incomprehensible enough to the outside world. And I needed to support myself. If people think I’m nuts, they may not trust me with their passwords, you know. It would have complicated remaining family relationships. Long and short of it, there are a million and one reasons why I felt it had to be suppressed.

I don’t know exactly what changed at this point. It’s been a process, at least a decade coming and it feels like it’s culminating now.  I’ve never allowed myself so much freedom, to say what I think, notice and believe. It’s simultaneously intoxicating and nerve-wracking! But you know, I am finding I really like it, anyway…