Six of Swords: Crossing the Water

You may not know where you’re going, but you are on your way there.

This is how I feel right now. It’s how the people I’m talking to feel. It’s kind of “a thing,” in the middle of eclipse season.

Bonus Points: Mercury is Rx now. I’m very Virgo, so sometimes Merc retrogrades get to me but this one doesn’t feel too bad. I’m just rolling with it and would advise others do the same. It’s in Gemini for goodness sakes! So we can detach.

In fact, taking a step back, taking your time in letting everything sink in is a perfectly workable plan for the coming week.

Cards, poorly photographed, are from the lovely Star Tarot deck. They are sitting on top of my gemstone collection (about to bust out of  this cool display case). Outlook is the Six of Swords, with advice from the reversed Six of Cups. 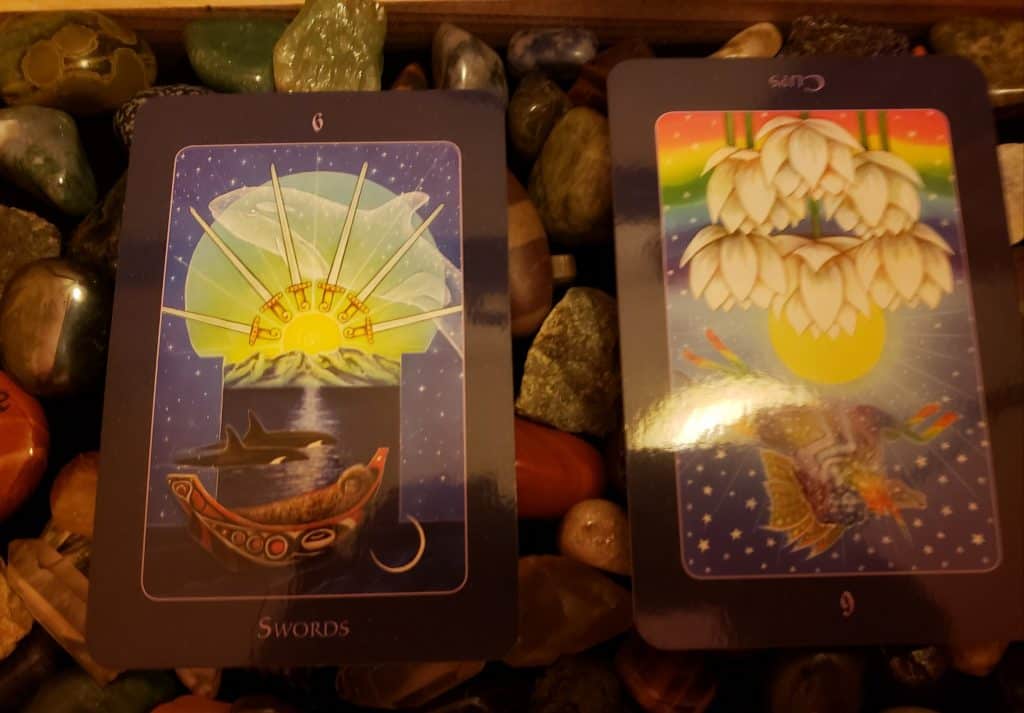 Not to be too dramatic here, but we’re crossing those shark-infested waters right now. Yes, eclipse season. I see you! No turning back.

I always see the Six of Swords as an encouraging message despite the downtrodden vibe, since it indicates we’re en route to the future. And while the trip itself–coming after many trials, usually–may leave us feeling a little battered, the worst is behind us. Knowing that is always helpful.

Interesting to see another Tarot Six, the Six of Cups reversed, as advice. Be aware of how your vision of what’s come before may be coloring your perception. The old way of looking at the world probably doesn’t fit quite right anymore.

Tarot Sixes generally denote some sort of harmony, cooperation or a “coming together” of circumstance, resources and/or efforts. In the Rider-Waite depictions, all the sixes have more than one figure on them, although one is sometimes central. Wherever your at now, it’s been a cooperative effort getting there. Neither you or another are singularly responsible for where you are. It’s been a joint venture, for good, bad or indifferent.

Understand however, that the journey itself is, in fact, a singular trek, with a subjective experience entirely personal to you. Others might come to understand parts of your experience in time, but probably not so much right this minute. Being fair though, we frequently don’t fully understand what we’re going through ourselves real time, huh? So why expect others would?

Nonetheless, the singular nature of the emotional journey doesn’t mean you’re without allies. Look for support from your “family,” whomever and however you count folks as such. Expect progress to sometimes feel sluggish and maybe even a bit harrowing. Look for opportunities to update your data here, too–last week’s conclusions won’t do this week. It’s not all the “the world is changing” so much as it is that “YOUR world is changing.” So openness, curiosity and observation are all helpful in order to navigate.

You’re on course and you’ve made it through the worst. Hang in there, friends! We are all moving forward, whether we like it or not. So why not try to like it?