Feel like you’re spinning your wheels at full tilt but not getting there?

I’m reminded with this week’s forecast, the process DOES matter. What you pick up along the way IS helping. The work you’re doing on the way WILL make a difference.

I’m also reminded that the old ways of looking at things probably just won’t do anymore, regardless of how much we’d like to hold on to certain illusions. It could be scratch. I’m sorry about that. But we gotta do what we gotta do.

Outlook is The Chariot, with advice from Death. Eeek! Cards are from the Star Tarot deck. 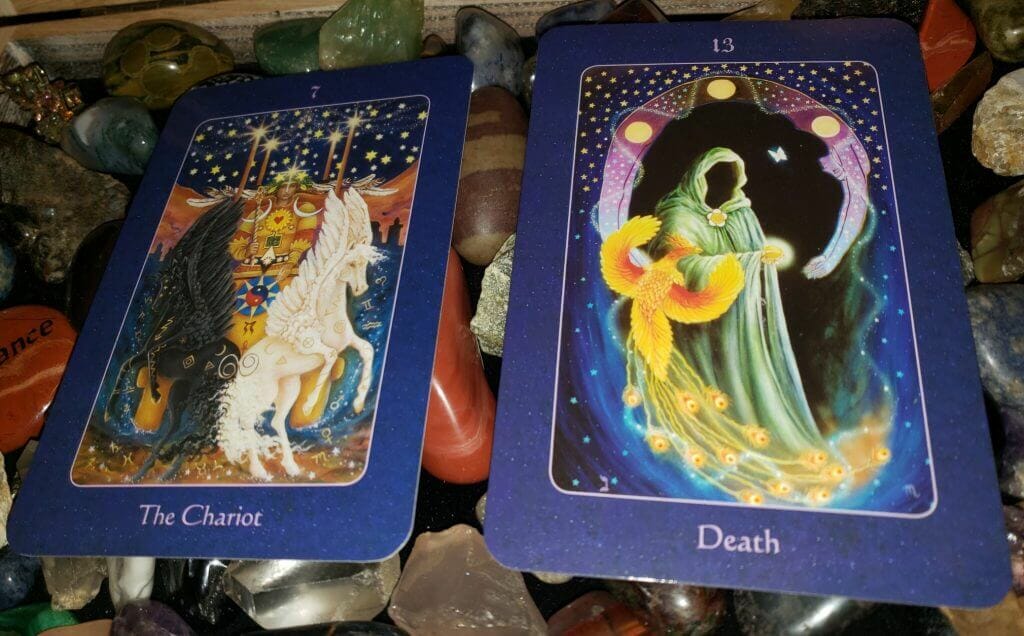 With the Chariot, I’m going to expect motion towards goals for sure, but indirect paths. The Chariot is ruled by Cancer, a.k.a. the crab who moves sideways. So you may not see movement directly from A to B, but all progress is good progress, no?

Bonus points for optimism, too. The Chariot driver is a victor and he always finds his way home. So if you’re like me, bothered by not yet being where you want to be, take solace in that.

As far as advice, Death is a little stickier. Death is ruled by Scorpio and it’s far from easy or pleasant most of the time. It’s deep. It’s messy. It can hurt. But it also is necessary for what’s to come.

Death involves letting go, want to or not. Death clears away a space, by digging deep, and accepting where you really are as opposed to where you want to be. Whatever is unworkable, old, rotted and worn out will have to be released. This is as necessary as it can be messy. For the least intense ride, don’t fight it. It won’t do any good in the long run and it will beat you up along the way if you do. Flexibility is a virtue here, as is letting go and accepting. Do your best to do all of that.

So in short, acknowledge you’re moving ahead, albeit indirectly. Let go of whatever is dead in the situation and don’t fight it. This is how to find your way home.

In the meantime? It’s Virgo season. Do your Virgo. Clean, organize, purge, make lists and plan. It will all help.

Reversed Ace of Wands: Pace Yourself