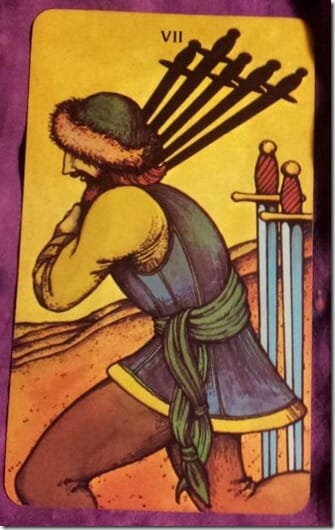 What sneaks up on you? What deception is coming to light?

Ah, the Seven of Swords—associated with Moon in Aquarius. Someone may be shocked, when the truth outs! This is generally a card of deception, hidden agendas, underhandedness or dishonesty. At the very least, whatever is going on is under-the-radar, not meant for public consumption. Whatever situation, the hope is to avoid attention.

“Something ain’t right in the milk,” as they say. That’s what the Seven of Swords signifies. Often, there is a theft, literal or figurative. Not all is lost necessarily. A couple of those Swords have been left behind. But don’t be surprised if the impact is significant.

For me, it’s old ways of defining myself, of evaluating, of constructing my own reality. It’s those old “mental tapes” I thought long retired. It’s needing proof that I’m a good enough person, because you know what? Deep down, I don’t always believe it.

When this sneaks it, it COSTS. And then, it’s gone like a thief in the night, leaving little if any trace. Leaving us confused, no idea what’s happened.

Well, today, look around. Question assumptions. Be aware of hidden agendas, dishonesty, and simply incomplete facts. See if there is any deception hiding in your worldview, any slight-of-hand in your emotional life. Root it out. Keep all your swords; they belong to you.

Are you feeling the Seven of Swords?