Do you ever hide feelings from yourself?

Not so much consciously. Not a mental exercise. More like just setting them aside and not noticing the buildup.

I have to deal with what’s right in front of me, right now. That’s enough. Right now.

People can get wound up inside without noticing on the outside. Everything seems together enough for the time being. It sneaks up.

Maybe you’ve got something vague, gnawing at you when you’re not moving for a minute. Maybe you feel a smidge uneasy and can’t say exactly why, but you can find an excuse to ignore it.

I’m as guilty of it as anybody else, until those submerged emotions bubble up and smack me in the face.  I’ve learned that much like dust building, those pesky feelings don’t go anywhere if you fail to do the work.

It’s emotional housekeeping time and it may well be past due. 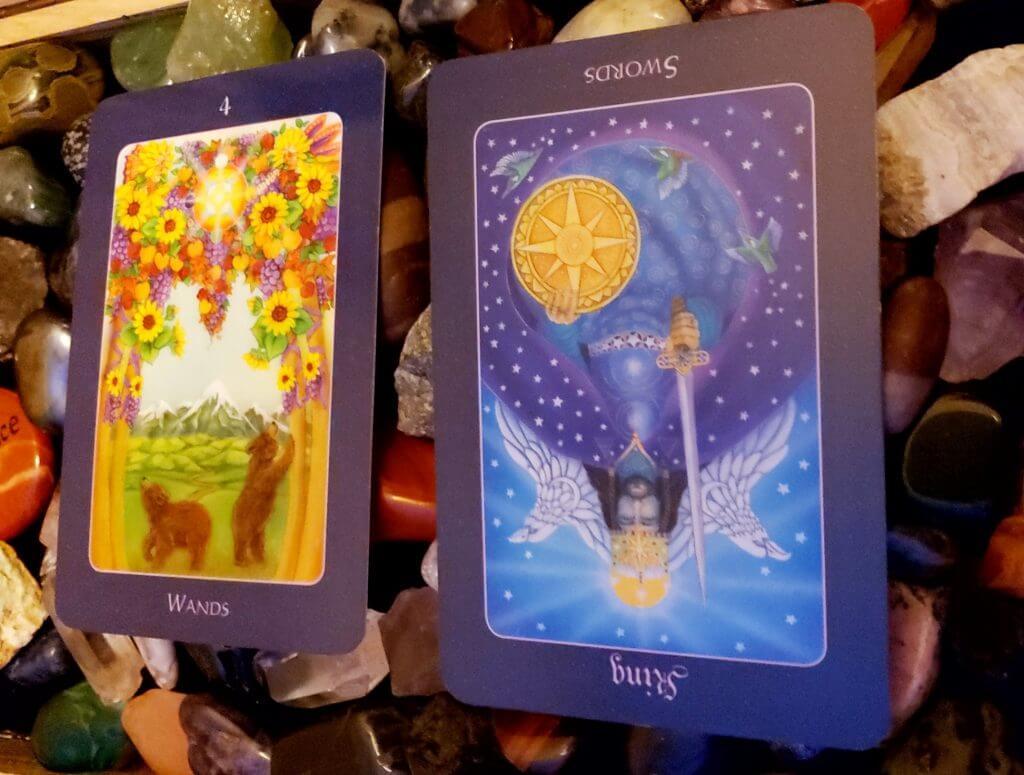 We’re looking at a Four of Wands forecast (nice!) with the reversed King of Swords offering wisdom. (Cards pictured from the Star Tarot Deck.)

All Tarot fours offer a bit of grace in the form of stability. I sometimes think of the fours as “exhale” cards. They tell you the situation is in hand for the present, even if you don’t know which direction you’re heading in the future.

And boy, do folks not know what direction they’re heading in the future right now! It’s practically a phenomenon.

The point is, that Four of Wands tells us things are okay, right this minute.  We’re in a lull. In a storm’s eye. For the moment, it’s a safe space.

Kings are usually all about making things happen. So reversed? Don’t push this week.  Instead, exhale. Look around. Understand how your emotions are impacting you. THEN, take your time to reason through anything you’re grappling with.

In other words, do your emotional housekeeping. Deal with anything that’s been building in the background or whenever you note any feelings sneaking up on you. Give yourself plenty of rest in between sessions and lean into self-care, because it’s damn hard work.

But with the emotional housework done, that king with aright himself and it will become possible to reason your way forward. But until then, don’t commit  You need the perspective of a clear head and heart first.