It’s just scary, sitting at “almost there.” If you’ve been seeking resolution a while, you’ve been through a lot already. You’ve searched and sorted and considered and planned. Maybe it’s been so hard and so long you can almost taste that resolution, just beyond your immediate grasp.

You’d think being close would make us feel better, wouldn’t you? But it doesn’t. Close-but-not-quite in these circumstances can be absolutely nerve-wracking.

“What if it all falls apart? Will I be back at square one? How can I make this come together? I can’t go through all that again…”

That’s what I’m pretty much expecting  short term: we’ve done what we can for right now and are in the process of letting what we’ve already begun finishing sorting.

We’ve got a bunch of retrograde planets now, including Mercury. Slowdowns aren’t only inevitable, they are necessary and useful under such conditions. Pauses are NEEDED. Remind yourself of that, at least after you’re done cursing.

But no matter how upbeat we try to be, emotionally we’re ready to move on and want it D-O-N-E-done. I feel you. If you’re right there feeling antsy for resolution, listen up. Next week’s forecast will help!

Outlook is the Four of Pentacles (Earth); advice is the reversed Chariot. Cards from The Good Tarot deck. 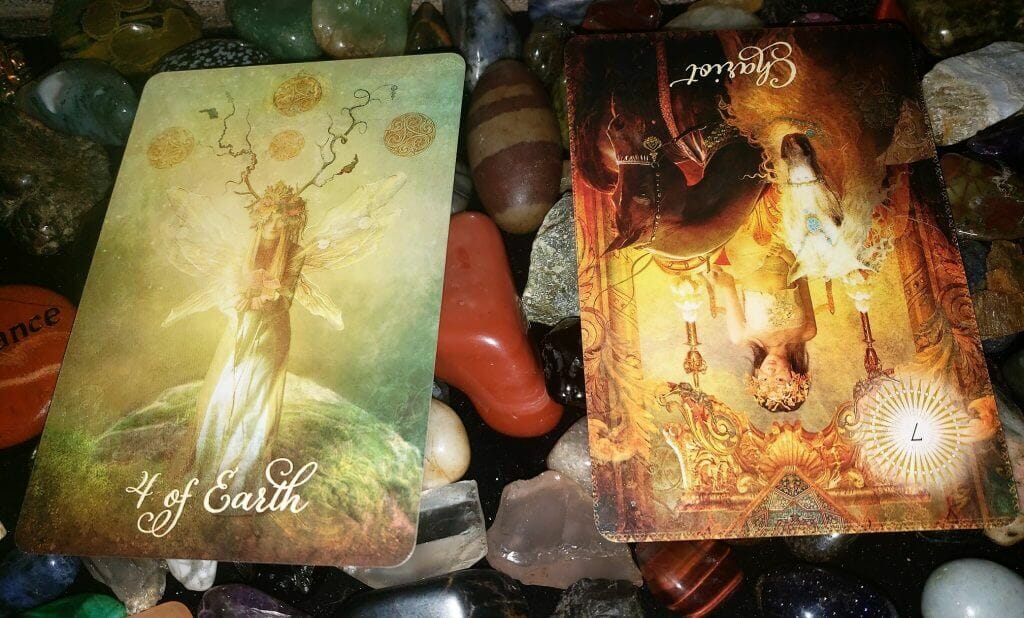 Now, I’m really happy to see that Four of Pentacles as the forecast for the week, because this card veritably screams “Stability!”

There may still be anxiety–okay, more like probably than maybe. Anxiety is usually a factor with this card. But Tarot fours are nonetheless stable. The situation is in hand. Knowing the sky will not fall should help jangled nerves, at least somewhat.

I also consider the Chariot a very encouraging card, no matter how it arrives. Upright is pure reassurance. Reversed might even be nicer sometimes, though. It’s an indication there is no need to push toward the end game. It verifies the apparently slow pace is appropriate.

No matter what’s going on, it will require time and space to sort this week. Nothing can be forced.

Either way this card appears, progress will seem indirect (and even more so when reversed than upright). Impediments aren’t so much powered through as they are worked around. Obstacles may be overcome in unusual or non-traditional ways and solutions may require creativity. But wherever you’re going, you can pretty much bet travel will be by way of the back roads. This card is ruled by Cancer–the crab moves sideways. So we will be sidestepping roadblocks and making indirect progress ourselves.

Don’t attempt to dig through the mountain with your bare hands. We’ll be going around or maybe taking s meandering sideways-up-down-and-over path. The way forward may be unexpected. The means will reveal itself in due time. Make sure you’ve stepped back enough from the situation that you can recognize the means when it arrives.

Survival Tips for the Coming Week

Know all is exactly where it should be right now, friends, And hang tough! We’re getting closer.