Three of Swords Rx: Rolling With It

I came to write this week’s column and just realized I didn’t write one last week.

Last week became kind of a blur.  I did what I needed to in each moment, and I felt good about whatever I was able to do throughout. So, I’m way not complaining. Not even a little bit. Because I’m happy to be able to do what I can–for both myself and the people I love. That’s exactly the position I want to be in.

But stressors can still add up. On Sunday, my usual deadline for the forecast, exhaustion had descended, and I crashed for most of the day. Nothing else really mattered at that point. I had to recover.

This week has been considerably less intense, thank the Gods! I still have more to do than time to do it, but that’s kind of normal at this point. I’m happy it’s not so much crisis management right now. It’s just management. That’s a very one-foot-in-front-of-the-other thing. That I can do.

When I look at these cards, I cannot help but think I’m not alone.

We’ve got some reversals on deck, with an outlook of a Three of Swords Rx, and advice from the Four of Pentacles Rx. Cards pictured from my well-loved the Legacy of the Divine Tarot. 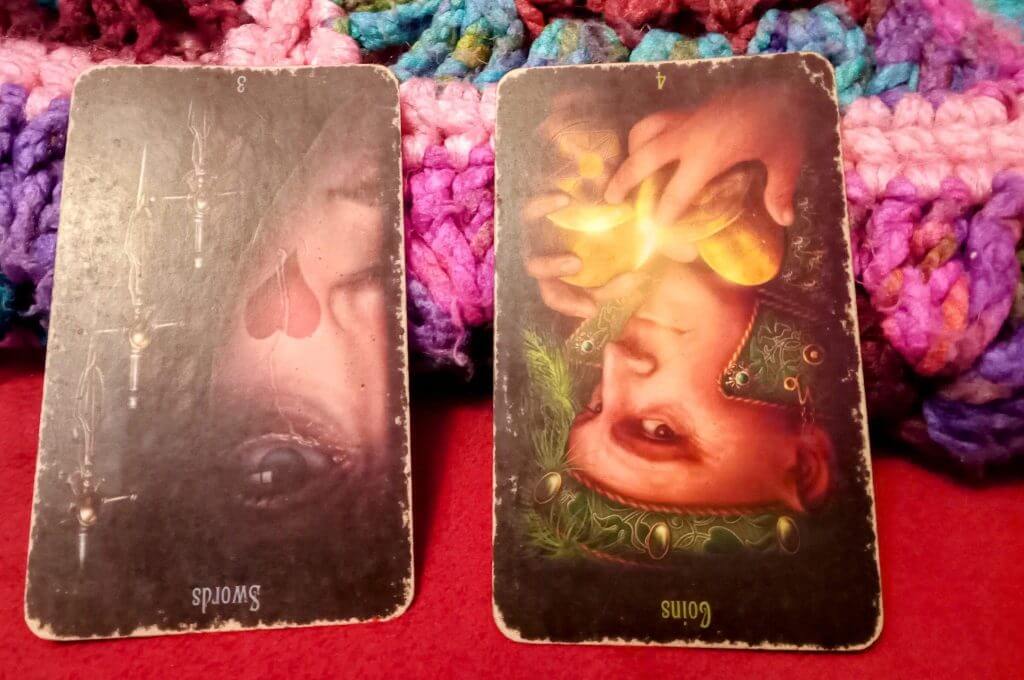 I seldom welcome that Three of Swords, but if we’re going to see it, inverted is better.

This coming week, there is fear of loss. I won’t say the fear is not legitimate, because it may well be. Sorry! There could be a loss, yes, but know this: ALL will not be lost. This energy is present, but not fully expressing. So, understanding this is definitely something–perhaps a big something. We may not love everything the week brings, but we will be alright here.

Advice? That reversed Four of Pentacles suggests we’re not going to be able to hold on to the status quo, despite vigorous efforts to do just that. So don’t try.

Instead: Do your best to accept what comes your way. Do the best you can with what you have right in front of you. Take care of what you need to, but especially take care of yourself.

Rest, get up the next day, and do it again.

But let me repeat myself here because it’s so important. Don’t forget to take care of YOU in the middle of it all, okay?

Here’s some of what self-care looks like for me…meal prep. Marveling at some nature. Getting my hands in the dirt.

So maybe my French Toast was too crowded in the skillet and some of them got too brown, but they were done. And maybe I spilled some dirt planting the flowers. But I planted the flowers. And maybe a lot of what I do is imperfect, incomplete or could be considered wanting from someone else’s perspective.

But it does not matter. I did things that support me, feed me, make me feel good one way or another. All this matters tremendously–and it makes it so much easier for me to be there for the people I care about the rest of the time.

Do whatever this looks like for you, okay? Don’t try to control what is inherently uncontrollable. Let go of that idea right now and you’ll likely feel immediate relief in the release.

Be sure to take care of YOU, throughout. Then, when you are energetically fed, you’ll be of some much more help to those you care about at the same time.

Have a good week out there friends. I’m cheering you on!

Four of Pentacles, Legacy of the Divine, Three of Swords