I’ve seen a lot of wasps this year, in my little sacred garden. They make me nervous, to be honest. If you look up wasp animal symbolism, they’re not considered especially negative, although I don’t know a lot of creatures that usually are pegged negatively, in new-agey animal symbolism guides. But I cannot help but think of their sting, every time I see one.

I’ll usually direct them to keep their distance from me while I’m outside, in exchange for the use of my garden when I’m not present. I think that’s a fair deal. Sometimes, they take me up on it.

Here we’ve got the Three of Pentacles, associated with Mars in Capricorn. This is some serious (Capricorn) activity (Mars)! The Rosetta Tarot’s wasp is building a nest. The eggs in each cell are marked with alchemical glyphs for Mercury, Sulfer and Salt, i.e. the building blocks of the universe.

The emphasis with this card is very much on building. Taking all the elements you have at a hand and actively creating your home, be it metaphorical or even more literal. You are the creator here. Work hard and diligently on laying the right eggs, to create the home, the life, the world you want to inhabit. Be prepared (Capricorn) to defend it (Mars). Fix your boundaries, do what it takes.

Used judiciously, a sting can come in handy to protect your home you know.

Are you building and defending? 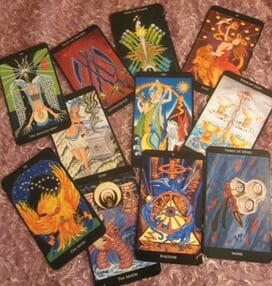 Purchase the Rosetta Tarot from the artist. It’s a limited edition deck, so don’t delay if you want your own. And I’d strongly suggest getting the companion book for an in-depth treatment on the arcane symbolism of these cards.