Every holiday season, I spend a little time reflecting on the year that just passed. It’s not an intentional activity so much as it just crosses my mind, with the milestone of the New Year. A little quiet time and thoughts of what the next year will bring does that for me.

A year ago this time, I was moving into an old, quirky trailer in the woods and on many levels, a much different life. The move was a result of a very specific choice I made.  The outcome of that choice could very aptly be described by the advice card for next week: demanding, all-encompassing, and hard. Also rewarding, mastery-building and important. Very much the energy of the World.

That’s a longer-term iteration of the energy I’m expecting for next week.

Outlook is the Two of Swords, with advice from The World. Cards pictured from the Star Tarot Deck. 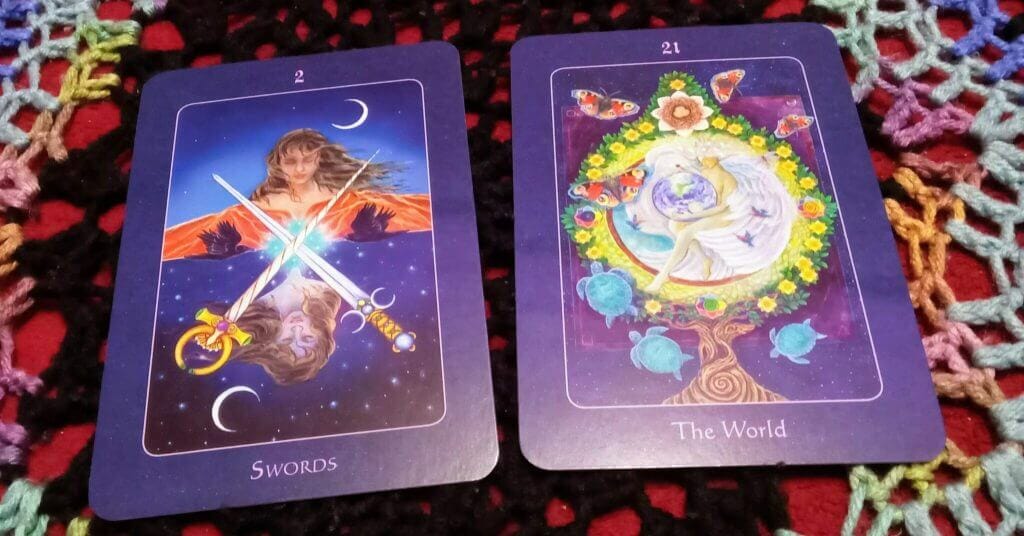 We’ve got choices to make.

One thing we sometimes miss in the effort to make “proper” choices: selections reflect how we see the world as much (or sometimes more) than anything else. I’m not expecting said choices to be clear cut. So don’t expect the “no brainers.” Think more in terms of “it’s complicated.”

It’s not the choice you make that matters nearly as much as how you LIVE that choice. It’s like when you choose a route on a journey. While sometimes one route will offer advantages over the other, there generally is not one “right” choice. You can take route A or route B. Doesn’t matter. What you are best not doing, however, is start on route A, worry about getting it right, so transfer to route B, then try to find A again. Line up with an option, make your choice and go with it!

Have you ever said to someone, “I’ll support you, whatever you choose?”

Do that for yourself. Make your decisions, set your boundaries and address your attention exclusively to making that work. The world as advice would have us all in! Once you select a direction, focus on making the most of the trip (and not second-guessing yourself over the choice).

You make the hard calls and support yourself in doing it. Then you go forward, doing the best you can with what you’ve got to work with.

Good luck out there, friends. And don’t forget to support yourself as you go forward, doing the best you can. It’s enough.

08/20/11: The Empress, Pomegranates and Paradox of Mothering