10 of Cups Rx: Be True to Yourself

Ever feel like the odd man out? This is sort of the story of my life.

Even when I try to fit in, I am seldom successful. When it works, it’s temporary at best.

Maybe you’d wonder why I’d try to fit in, anyway. I’d wonder that, too, if I didn’t already know.

Humans don’t want to feel alone. We like to be part of groups and feel understood, valued and yes, validated. We’re not always sure of ourselves and even if we do feel sure, we also want to feel connected at the same time. Being the odd man out threatens our status and we’re not sure we’ll be accepted without conforming to group norms.

But you can’t compromise yourself just to avoid potential rejection. This is true whether we’re among a group of strangers or the more challenging circumstance sof standing among those we consider family in some way. 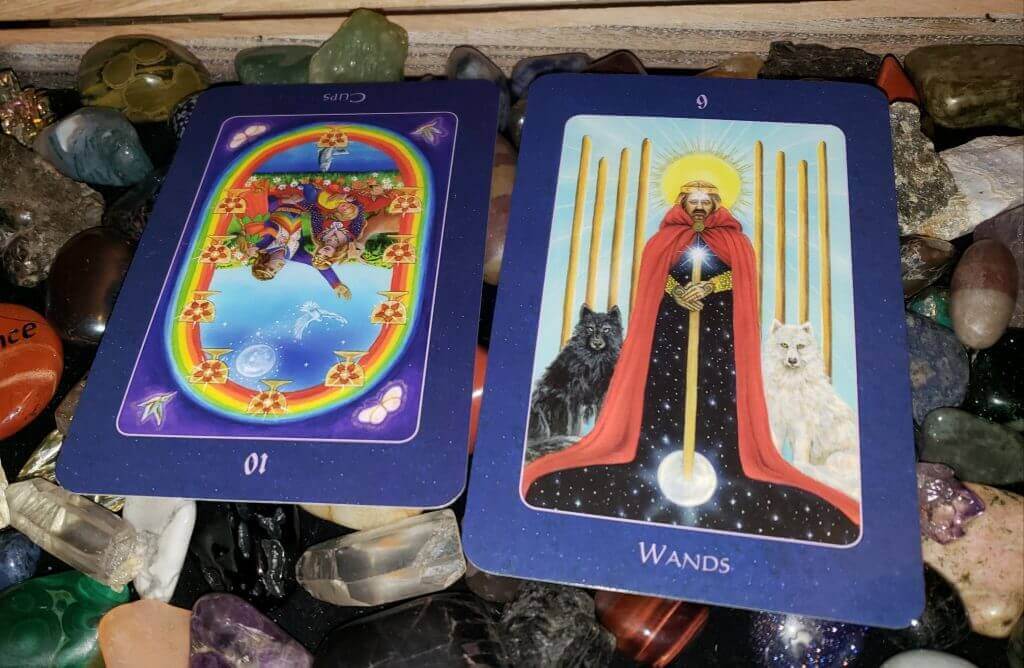 Outlook is the Ten of Cups reversed, with advice from the Nine of Wands. These cards are slightly softer than what we’ve been getting recently, so I’m happy about that at least. But it’s still not completely comfortable. (Cards pictured from the Star Tarot Deck.)

People differ in how they read reversals, if at all. I tend to read them as partial or incomplete expression of whatever vibe the card speaks to. Sometimes a particular reversal will just say something specific to me, though.

In this case, the reversed Ten of Cups is coming through as insecurity about one’s place within “the family.”

Now, obviously we could be talking birth family.  But it could also apply to other types of groups: work, friends, religious, political, extended family, whatever.

We may feel a bit at odds with others this coming week, as if we just don’t belong. I don’t know if the sense of not completely belonging is accurate or not–I guess it depends on what “belonging” means to you. But the feeling is real.

But on top of the sense of being on the outside somehow, there’s also a worry that if we don’t tow the company line–whatever “company” we’re talking–we may be expelled from the group. There’s a pressure here, perhaps self-induced, to conform. We may feel uncomfortable considering standing apart from the group consensus.  There’s a push/pull between being true to ourselves and fitting in.

As far as what to do about it, the Nine of Wands is clear. Stand true to your convictions and don’t turn away from who you are in order to appease others. No majority-rules polls.

Look within. Don’t sway from what you know as truth. That which you consider truth will change over time, but the integrity of following it to the best of your ability does not.

Honor your truth.   I mean, c’mon. That’s never bad advice, is it?  But just realize, the question may come up.

It’s okay if your convictions aren’t consistent with any sort of consensus. What matters is that your convictions are YOURS. Maybe you won’t always have the same ones forever. If you’re living right, your probably won’t. But for however long you hold any conviction, it’s best to heed it.

Your path is your own. Own it.

10 of Cups: Quest for Harmony