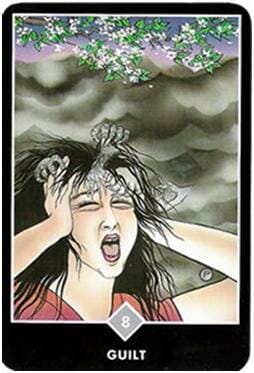 Guilt comes to visit. Guilt is represented by the 8 of Clouds (Air), so it’s a thought-focus message. It’s not hard to recognize this woman’s agony, with the claws of her guilty haunting taken over, ripping through her ability to navigate the storm by completely overshadowing everything else.

I’ve often said guilt is an utterly useless emotion. I distinguish guilt from regret – we take wrong turns sometimes, and make choices that end up hurting others or ourselves. A person with a conscience is sorry, and in regret, may strive to make things right or when the attempt would do more harm than good, at least commit to not repeating the mistakes. That’s productive. It’s responsible and it’s growth.

Guilt, on the other hand, quickly degenerates into self-flagellation. There’s no option in our scheme of linear time to go back and undo mistakes. When the guilt monster takes over, you’re left walking through a storm of self-loathing, feeling acutely those nasty claws of self-disgust that dig into your every thought. “If only…” becomes a mantra that has no resolution.

Yes, there is a storm surrounding this woman, and the guilt monster’s claws accurately reflect that environment. But she doesn’t have to contain the entirety of the storm within herself; it doesn’t have to dominate her experience. If she can  get those claws out of her eyes, she will gain perspective. She can then see there are also clear skies beyond the storm. Storms pass. She could see the spring buds on the tree right above her, easily within her reach.

The same storm that pelts down that torrential, emotional rain helps the spring buds grow. We all have storms, and we all have flowers. Don’t deny either. Instead, step out of the storm, shake off the guilt, and grant yourself the gift of perspective. You’ll certainly be in a better position of making a positive difference about any regrets you may have with that clearer vision.

Do you think guilt is healthy or hindrance to living a good life?