Five of Swords: One Step at a Time

“Instead of reaching for capital-A answers, reach for a sense of relief, improvement, moving in a direction that feels a little better–not the endgame A-to-B path.”

As I heard myself happily handing out this advice, I suddenly realized I’d been saying similar to other people lately. A lot.

Awareness triggered.  As is usually the case when I finally take note of giving out repetitive advice, the guidance itself is especially relevant to my own life. That’s how this gig works, at least for me.

I considered. Truth is, I’d found myself getting hung up where I was trying to end up and the seemingly impossible route to get there.  It was getting to me, but I didn’t know exactly what to do with it. That “ideal”  orientation can be overwhelming when there are too many variables and no easily discernable, direct path to said end game. It feels like a standoff.

It’s only a standoff, though, until you are willing to shift your focus.

Insisting on perfection stops us from seeing paths to improvement. What’s more, it can leave us feeling like we’ve failed when, in fact, we’re merely en route.

Know your non-negotiables and realize for these, “better” is good enough. Ultimately, looking for better has the huge advantage over seeking perfection because better is achievable from where we’re at right now. We may not be able to find our way to perfection in a fell swoop. But every single time, we can reach “better.” What’s more, better is always well worth reaching for.

As long as you keep taking steps in the right direction, the question of arrival works itself out.  Remember that point, because it will be on the test for next week.

Outlook for the week is the Five of Swords–oh. So I reach for additional info, coming in as Justice reversed. Advice? Two of Wands. Cards pictured from  one of my favorites, the Star Tarot deck.

I’ll be honest here: I pulled the additional card because I was thinking I had the Five of Cups (grief) as a forecast, not that Five of Swords (conflict). But even when I realized my mistake, I decided it still gives me a little more to work with. And work with it we will! 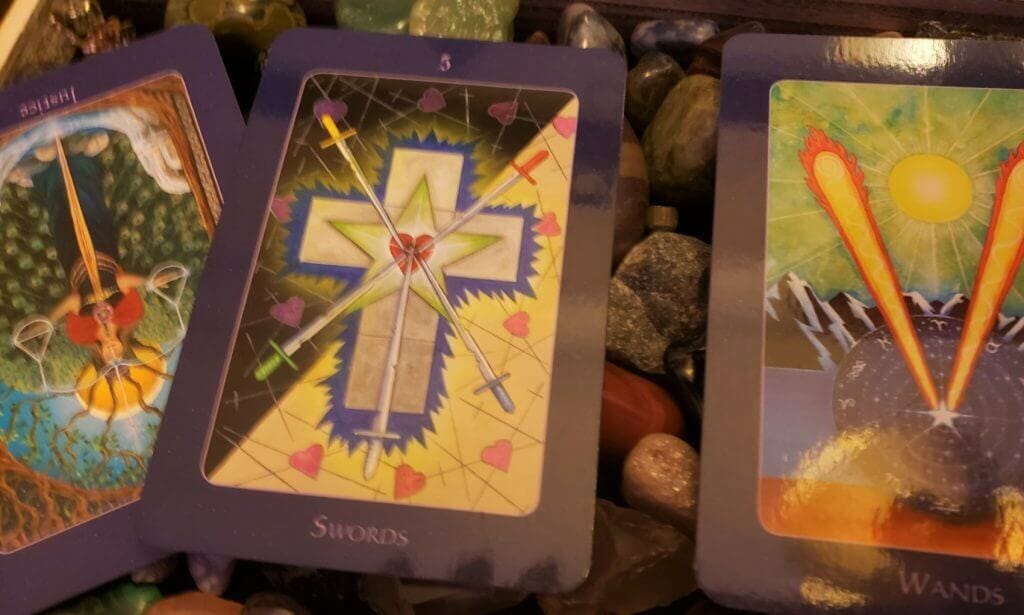 Expect frustration to show up this coming week, perhaps especially around something you consider to be unfair or potentially unjust. Maybe things didn’t work out the way you expected–or were promised. But it often doesn’t, huh?

With the Two of Wands for advice though, the trick isn’t so much fighting every little bit of what is. Instead, this counsel would have you exclusively standing up for what really matters to YOU.

Insist on what’s most important. Let everything else slide. Think of it an an emotional “streamline and simplify” directive.

Got that? Streamline. Simplify. Focus on what matters most, and let the rest go. Reach for relief instead of perfection.

Five of Cups: Find the Rainbow (Together)

Looking for What You Like: Tarot Forecast, Sept 26 – Oct 2