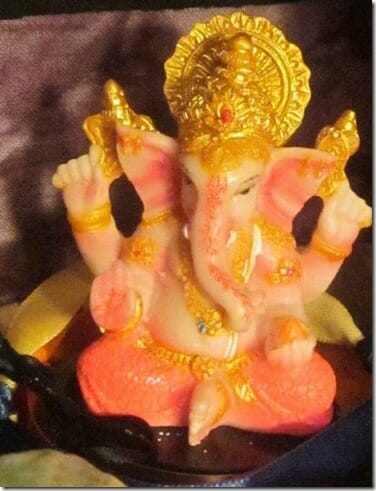 I went to a Money Magic Class at the local woo-woo witchery shop recently with a girlfriend. It was a fun workshop: a hodge-podge of  Feng Shui, spellwork, and assorted money-attraction mojo advice. Plenty of ideas for the would-be witch. Most of all, I loved that she started with emphasizing acknowledging abundance, the “enough” we already have. I felt a little richer, a little more grateful, before we hit a single example of money magic. I consider that success.

One suggestion was devoting some worship-love to Ganesh. I liked the idea, so I ordered a statue.

On the way to the store, I grabbed the mail, and he’d arrived just in time for the New moon. I didn’t want to wait to open the package.  So I turned on my chanting cassette, the one that came with some-woo-woo-thing-or-other I’ve got somewhere else. A freebie, a gift. I decided to let the magic of sound, sacred chants, to welcome Lord Ganesh. A fitting tribute, I thought.

I set the statute in my minivan, and went in the store to buy food, not thinking right then about the how much ability to walk into a store and come out with food for the week is indicates prosperity, in and of itself.

I came home and burned some candles in his honor, letting him get the lay of the land. He’s not settled upstairs, in my wealth corner. That means he rules the top left of my Tarot desk. This picture doesn’t begin to do him justice. The colors are beautiful!

I’ve left him a couple of food offerings (you leave them for a day or so, until he is done with them). I’ve anointed him used some essential oils, burned lots of white candles in his honor, surrounded him with gemstones and—from time to time– communed with his spirit.

As part of my devotion, eh, maybe I should start learning about him, huh? Har.

Ganesh(a) is widely worshipped in Hindu culture, considered the God of Luck, prosperity and abundance. Offspring of Lord Shiva and Goddess Parvarti, there are a few different stories of how he got his elephant head. One story explains why he often protects entrances.  He’s also a remover of obstacles—or responsible for them, as the situation calls demands! In other words, he regulates. He rules transitions.

His symbolism provides advice for those who would follow him and benefit from his blessings. 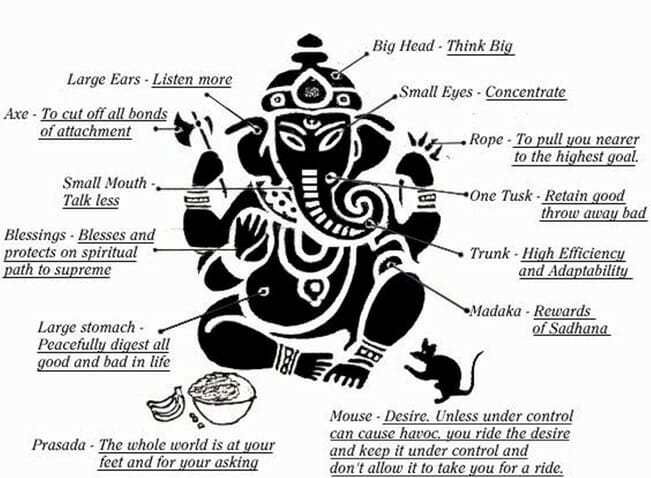 What do you think of Lord Ganesh? Do you have any favored deities?

Law of Attraction and Blame the Victim?