Review of the Housewives Tarot Deck

First time I saw the Housewives Tarot, I was simultaneously attracted and disturbed. I love kitschy fifties artwork. But on a Tarot deck? I wondered if it was one of the endless line of annoyingly mediocre novelty decks, or is there something useful there?  Are the cards spoofs, or do they address the meanings traditionally represented in Tarot?


I mentioned the Housewives Tarot as an example of an odd deck I was interested in, one of my Tarot people got it for me for Christmas. Thanks, Jilly! So now I can share it with you.


I have no interest in collecting decks just for the sake of having them—perhaps surprising to those who are familiar with my deck collection. My bottom-line questions for any deck is can you get insightful readings with it? Novelty decks like this one won’t have the wealth of symbolism you’ll find in Rider-Waite or Thoth, but they have to have some kind of wisdom to impart when presenting Tarot archetypes or I’m not interested. That’s the beauty of archetypes—they can be represented in an endless multitude of ways.


While we’re talking symbolism, there is NO astrological symbolism included in the deck or card definitions. So you’re on your own in that regard, astrology peeps. Sorry! But there are a lot of other things going for the Housewives Tarot.


The packaging stands out even before you’ve opened the box. The Housewives Tarot comes in a sturdy recipe box, with a plastic inset holding the cards and dividers, for the major and minor arcanas and instruction booklet. Each divider even has a recipe on the back. The book is a little more substantial than your average Little White Book (LWB), and includes your standard beginner advice, all while keeping to the theme. Starter spreads include one in the shape of a martini, a dinner setting and a clothesline. 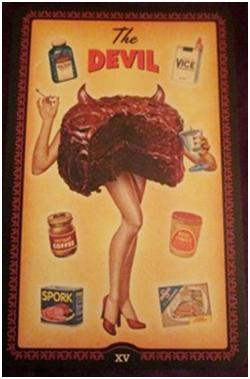 I had already made up my mind about the usefulness question once I saw the Devil card. It’s meaning is pretty much immediately accessible, don’t you think? I just love this Devil!


Of the Devil card, the LWB says: “Temptation. Vice. Self-Destruction. The modern convenience of TV Dinners, instant coffee crystals and processed cheese is a con. The sinful satisfaction of martinis, cigarettes and devil’s food cake with rich, creamy frosting. Oh, how the Devil inside us love seemingly simply solutions and indulgent luxuries! It’s not good to suppress these temptations entirely, but take great care not to let such vices rule your life. Succumbing to your dark side too often will surely bring about your downfall.”


Each card has a similar entry: an almost sepia-toned image from the card, a few keywords and a paragraph offering a suggested interpretation. If you’re familiar with Tarot, you won’t need to read them all, but you’ll probably want to since they’re fun and they offer the Housewives’ Tarot unique perspective on each card.


The cards themselves are standard size, on reasonable quality stock and backed with a gingham tablecloth pattern. I was a surprised they weren’t coated, though, as they’d be a lot studier that way. But even without the coating, these cards don’t feel flimsy or especially delicate.


All in all, this is obviously a very lighthearted deck, but I’m finding the cards do retain the “soul” of their traditional brethren, which is what I’m looking for with any deck. The cards I’ve drawn in getting to know this deck have been spot-on and insightful, just like you’d expect from any usable deck.


This would be a very non-threatening introduction for those unacquainted with Tarot or those who may be disturbed by the standard imagery. (Death in this deck is illustrated with a jar of rotting mayonnaise, for example. The point remains intact.) Experienced readers may find it a good deck for when you need both some insight and some cheering up. It’s both useful and fun—not a bad combo!


Here’s a random sampling of some of the cards.

What do you think of this deck? You own it (or want to)?


Looking for a personal Tarot Forecast?

Learning about the Chakras – Video Class

Should you “Test” your Tarot reader?